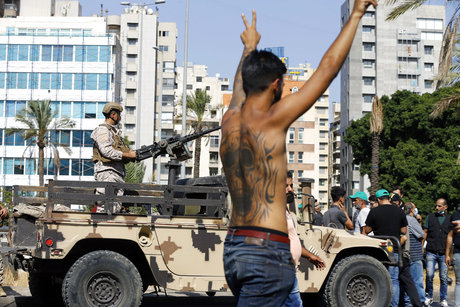 With gun battles breaking out in Tayyouneh Thursday during a protest against Judge Tarek Bitar, AFP looks at how the apocalyptic blast that devastated the port of Beirut last year has rocked the country.

On August 4, 2020, one of the world's biggest ever non-nuclear explosions destroys much of Beirut's port and wrecks swathes of the capital.

The blast was caused by a fire in a warehouse which had held a vast stockpile of the industrial chemical ammonium nitrate for six years.

The huge explosion leaves more than 200 people dead and 6,500 injured and the city in a state of shock.

The tragedy strikes as Lebanon is mired in what the IMF later calls one of the world's worst economic crisis in 150 years.

His visit is praised by many Lebanese angry at their own leaders, whom they accuse of corruption and incompetence.

Macron calls for "deep changes" but the next day President Michel Aoun rejects any international probe into the disaster.

On August 8, thousands demonstrate, angry at their leaders over the explosion. Clashes with security forces erupt.

The next day, the international community pledges around $300 million in aid but demands it be directly distributed to the population and that a transparent probe into the blast is carried out.

At the end of the month, diplomat Mustafa Adib is named as Lebanon's new premier.

But on September 26, after weeks of political deadlock, Adib bows out.

Macron says he is "ashamed" of Lebanese leaders who he claims have "betrayed" their people.

On October 22, three-time prime minister Saad Hariri is nominated again, promising a government of experts to stop the economic collapse.

On December 2, at a second aid conference, Macron urges Lebanese politicians to form a government.

Just over a week later the lead investigator into the explosion charges Diab and three ex-ministers with negligence.

But the probe is soon suspended, and a court removes the investigator in February.

In June, rights groups including Amnesty International and Human Rights Watch call for a U.N. investigation into the blast.

In early July, the new judge investigating the blast says he has summoned Diab and taken steps towards indicting former ministers and security officials.

Parliament says it needs more evidence before it waives immunity for three former ministers who are also lawmakers, a position that the lead investigator rejects.

On July 15, Hariri steps down, unable to form a government.

But the new government has been shaken by demands from the powerful Shiite group Hizbullah for the judge investigating the blast, Tarek Bitar, to be removed.

He was forced to suspend his probe on Tuesday after the former ministers he had summoned on suspicion of negligence filed lawsuits against him.

One of them, ex-minister Ali Hassan Khalil of the Amal Movement, threatened "political escalation."

Amal and Hizbullah called Thursday's rally which ended in violence, with their supporters marching on the Palace of Justice to demand the judge's sacking.

This battle should not stop until Huzbullah is disarmed as all the factions in Lebanon did. The Lebanese forces, which then had more arms than Huzbullah, handed over its arms and remained in the political arena. Huzbullah should do the same. Any other way is the way to hell.