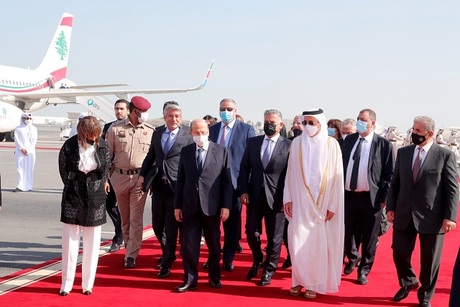 Sheikh Tamim said that the Qatari foreign minister will soon visit Lebanon “to offer aid and support,” the Presidency added.

The two leaders agreed during the meeting that “the current stage requires the support of Arab countries for Lebanon” and that “overcoming any problem that might affect these relations is a necessity.”

The Presidency said that competent ministers from Lebanon and Qatar will hold meetings to study the discussed topics based on the agreements between the two countries.

Aoun and Sheikh Tamim also discussed the bilateral relations between the two countries and ways to improve them, the Presidency said, and Aoun welcomed any Qatari investment in Lebanon.

Aoun had told al-Raya Qatari newspaper, in remarks published Monday, that his visit to Qatar expresses “the depth of the friendship and the strength of the relation between the two countries.”

He also expressed gratitude for Qatar’s support for Lebanon after the Beirut port blast and praised Qatar’s diplomacy.

Qatar has one of the largest natural gas reserves in the world and had been a major investor in Lebanon in the past.

However many countries have refused to invest in Lebanon or offer assistance to its government before it implements major reforms to fight the corruption and mismanagement that sparked the economic meltdown in 2019.

On Tuesday, Aoun will attend the opening ceremony of the FIFA Arab Cup in which 16 teams will compete. The 19-day tournament is an opportunity for the world to witness Qatar’s new stadiums that will host the World Cup next year.

Aoun’s visit came as scores of protesters blocked major roads in Lebanon Monday to express anger against the country’s political class for the worsening economic crisis and harsh living conditions.

Yes Qatar, sponsor of the taliban, Hamas and Hezbollah…. All terrorists. Thanks but no thanks, keep your dirty money and we’ll keep our dignity.

Agreed, they sponsor all these fanatics you mentioned. In addition as has been noted by other news outlets the human right abuses suffered by foreign workers who were building all the world cup stadiums and low wages offered.

Also if I recall not o long ago all the axis of resistance mouth pieces were blasting Qatar for working secretly or in pain sight with the arch enemy Israel, but now suddenly all is good.