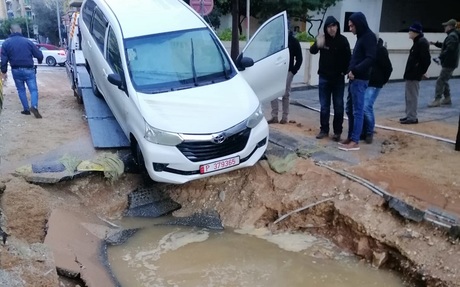 The burst submerged 13 cars in a building's parking in water, and damaged the main road. A car fell into the sinkhole caused by the road's subsidence.

The Beirut Fire Brigade, in cooperation with specialized technical engineers from the Municipality of Beirut, worked on removing the water.

The burst was not due to the stormy weather conditions, media reports said, but rather to a malfunction in the over 100-year-old water pipe.

“The incident sheds light on the water networks' condition in old and neglected buildings of Beirut,” Governor of Beirut Marwan Abboud said.

"We have treated three cases of road subsidence in the recent period," he added.

"There is no maintenance and no one is taking care of the infrastructure," Abboud said.