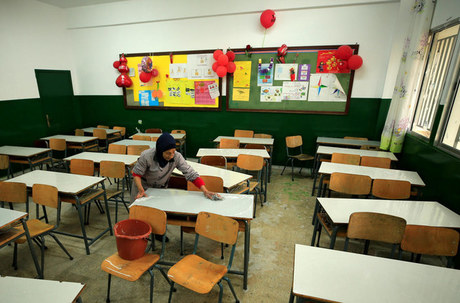 The World Bank said it has agreed with its partners to repurpose $37 million in funds to help Lebanon's public school teachers survive a crushing economic crisis.

The World Bank and the UK Foreign, Commonwealth and Development Office would divert the money from the Lebanon Syrian Crisis Trust Fund, which aims to assist Lebanese communities accommodating Syrian refugees, the bank said in a statement.

It would be used to "provide financial incentives to public school teachers suffering from the severe economic and financial crisis in Lebanon to ensure they can purchase fuel to travel to work," the statement added.

The "exceptional" financing, which is valid only for the 2021-2022 academic year, came at the request of Lebanon's government, the bank said.

Lebanon, home to more than one million refugees from war-torn Syria, is grappling with an economic crisis that the World Bank has branded as one of the worst the world has seen in modern times.

More than 80 percent of the population lives in poverty and the local currency, the pound, has lost 90 percent of its value against the dollar on the black market.

Public school teachers who were already underpaid before the onset of the economic crisis two years ago have since been pushed deeper into poverty.

Their salaries in pounds are a fraction of what they used to be due to the currency's rapid devaluation.

Many cannot afford to purchase fuel to go to work after the government gradually lifted subsidies causing the price of hydrocarbons to more than quadruple within a few months.

To fill a medium-sized vehicle's tank, Lebanese motorists would now have to pay more than the monthly minimum wage of 675,000 pounds ($25).