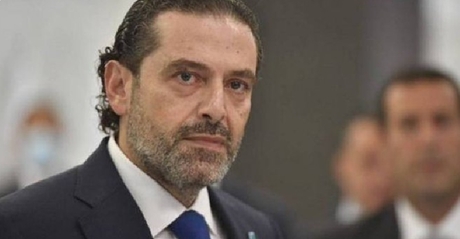 Al-Mustabal Movement leader ex-PM Saad Hariri arrived at dawn Sunday in Beirut to mark the 17th anniversary of the assassination of his father, ex-PM Rafik Hariri.

Hariri will visit his father’s tomb in downtown Beirut at 12pm Monday, his press office said.

The ex-PM had on January 24 announced that he was leaving politics for now and would not run in upcoming parliamentary elections. The Hariri family has dominated politics in the small country for decades. Saad’s exit leaves the Sunni community with no obvious leader for the time being, amid speculation that the abstention of the moderate Hariri could result in hard-line Sunni politicians playing a bigger role in Lebanese politics.

Hariri, a three-time prime minister and current member of parliament, inherited the political leadership from his late father, billionaire businessman Rafik Hariri, who was one of Lebanon's most powerful and influential politicians after the end of the 1975-90 civil war.

The late Hariri was assassinated on February 14, 2005 in a massive truck bombing in Beirut. Afterward, the family chose Saad to lead despite the fact that he has an older brother.

Hariri, who was traditionally in the camp opposing Lebanon's Iran-backed Hizbullah, has largely co-existed with the group, forming coalition governments that included Hizbullah. That cost him support from Sunni powerhouse Saudi Arabia, the rival of Iran, over influence and clout in the region.

Now, as he exits from political life, Hariri said he is convinced there is "no room for any positive opportunity for Lebanon" in light of Tehran's growing influence, internal divisions, rising sectarian sentiments and the dysfunction of the state.

He also acknowledged in an emotional televised speech that he had failed to prevent Lebanon from falling into the worst economic crisis in its modern history. Hariri added that he did all he can to prevent civil war in Lebanon by compromising, an apparent reference to forming governments that included Hizbullah.

Hariri has been the most powerful Sunni Muslim politician in Lebanon since 2005. He took the post of prime minister three times until he was forced to resign in October 2019 following mass protests against the country's ruling class. He was appointed to the position a fourth time, but was unable to form a government.

"Despite his political woes, Saad Hariri remains the primary Sunni leader in Lebanon," Randa Slim, a political analyst with the Washington-based Middle East Institute said in a Twitter post. "His political exit will create a vacuum," she said, adding that the scramble for the Sunni community leadership mantle will now intensify.

Hariri, who is mired in financial troubles, has for years played a balancing act in Lebanon's delicate, sectarian-based political system. He often found himself caught between the region's two feuding powers -- the Sunni kingdom of Saudi Arabia and Shiite Iran.

In 2017 Hariri was cast onto an unknown path when he was believed to be forced to announce his resignation in a televised statement during a visit to Saudi Arabia, citing Hizbullah's domination of Lebanon. The dramatic move backfired: Hariri returned home and restored his alliance with Hizbullah, losing Saudi backing.

Saudi Arabia, once his main backer and the country where the Hariri family made much of its fortune, distanced itself from the 51-year-old politician.

Relations with Hizbullah worsened in 2020 when a U.N.-backed tribunal sentenced a member of Hizbullah to life imprisonment for his involvement in Rafik Hariri's assassination. Hizbullah denies the charges.

Hariri's decision came despite the fact that several prominent politicians, including Parliament Speaker Nabih Berri and Druze leader Walid Jumblat, tried to convince him to change his mind.

It was not immediately clear what Hariri, whose family currently resides in Paris, would do away from politics.

Hariri was a young political novice when he was thrust into the spotlight following the assassination of his father and had to learn fast. But he lacked his father's political savviness and clout and often fumbled his way through Lebanon's complex and sectarian-based politics.

His business also suffered and in 2019 he had to close a TV network and newspaper owned by his family following a years-long financial struggle.

Commemorate your father's murder anniversary in your home. Nobody wants to see your face or hear you use your father's name to advance your failed agenda. You/your incompetence are one of the main reasons for Lebanon's collapse.

He had nothing to do with it. Go blame hezbollah and aoun first