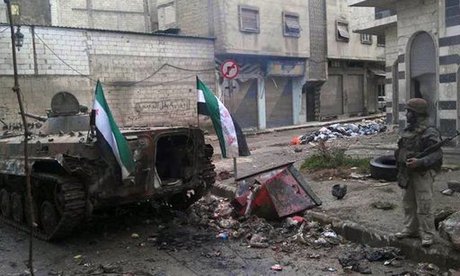 Information Minister Adnan Mahmoud on Saturday accused Syrian rebels of shelling the protest hub of Homs to swing a U.N. Security Council vote in their favor.

"The reports on some satellite channels that the Syrian army shelled neighborhoods in Homs are fabricated and unfounded," Mahmoud said in a statement to Agence France Presse.

He charged that "armed terrorist groups, incited by the Istanbul council (opposition Syrian National Council)" carried out the assault on Homs and other areas "to swing the vote" at the Security Council.

The Security Council met on Saturday to vote on a draft resolution condemning the Syrian government's deadly crackdown on protests, just hours after activists accused the regime of a "horrific massacre" in Homs.

Russia and China vetoed the resolution proposed by European and Arab nations, while 13 of the 15-member council voted in favor.

Activists say Syrian troops killed more than 230 people in shelling of the city of Homs overnight.

But the Syrian minister denied regular army troops had any hand in the bloodshed, and said bodies of victims broadcast on some news channels were "those of civilians abducted and killed by armed terrorist groups."

"The armed terrorist groups took pictures of the bodies and passed them off as victims of the alleged shelling in a bid to influence the positions of some countries during Security Council deliberations," Mahmoud said.

"What happened yesterday is that armed terrorist groups indiscriminately fired shells on streets and neighborhoods in Homs to kill civilians and terrorize others and then pin the blame on the Syrian army," he added.

hahahahah yeah as if anyone is going to believe that... Signs of desperation...

didnt aoun wahhab hezbollah said a few months ago that everything was under control in syria? ....