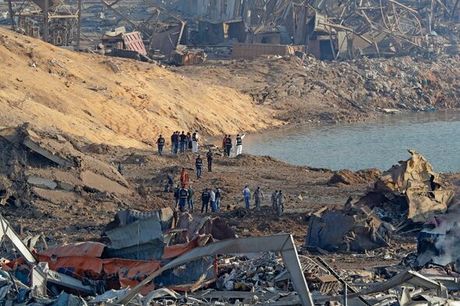 Lebanon, which holds parliamentary elections on May 15, has been mired in a deep financial, economic and social crisis, aggravated by a political deadlock.

Here is a recap since turmoil broke out in October 2019.

Mass protests follow a government announcement on October 17, 2019 of a planned tax on voice calls made over messaging services such as WhatsApp.

In a graft-plagued country with poor public services, many see the tax as the last straw, with demonstrators demanding "the fall of the regime."

The government of prime minister Saad Hariri scraps the tax the same day.

But protests continue over the ensuing weeks, culminating in huge demonstrations calling for the overhaul of a ruling class in place for decades and accused of systematic corruption.

Lebanon, with a $92 billion debt burden equivalent to nearly 170 percent of its gross domestic product, announces in March 2020 that it will default on a payment for the first time in its history.

But talks with the IMF quickly go off the rails.

A massive explosion on August 4, 2020 at Beirut port devastates entire neighborhoods of the capital, kills more than 200 people and injures at least 6,500.

It emerges the huge pile of volatile ammonium nitrate that caused one of the biggest non-nuclear explosions ever recorded had been left unsecured in a warehouse for six years, further enraging the Lebanese public.

Diab's government resigns shortly after the blast after just over seven months in office.

Diplomat Mustafa Adib is named new premier but bows out after less than a month, and Hariri, who already served as prime minister three times, is named in October.

Amid runaway inflation, authorities announce in February 2021 that bread prices will rise further.

In June, the World Bank says Lebanon's economic collapse is likely to rank among the world's worst financial crises since the mid-19th century.

After nine months of political horse-trading, Hariri steps aside on July 15, 2021 saying he is unable to form a government.

But the new government is shaken by demands from the powerful Hizbullah for the judge investigating the Beirut blast to be removed on grounds of political "bias."

Tensions come to a boil on October 14, 2021 when a shootout kills seven people following a rally by Hizbullah and its ally Amal demanding Tarek Bitar's dismissal.

On January 24, 2022 the IMF launches talks with Lebanese officials.

Miqati's government meets for the first time after months of negotiations between rival factions.

On February 11 the IMF calls for fiscal reforms to ensure Lebanon can manage its debt load as well as measures to establish a "credible" currency system.

On April 7, the lender says it has reached a staff-level agreement to provide Lebanon with $3 billion in aid over four years.