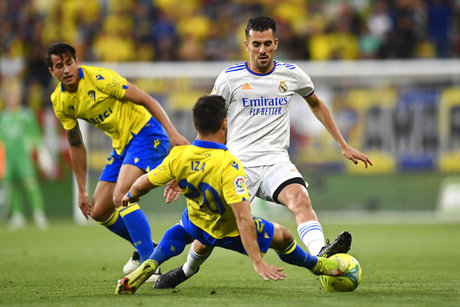 Three teams are fighting to avoid relegation on the final day of the Spanish league, while Real Madrid gets its last chance to fine-tune before facing Liverpool for the European Cup.

Madrid clinched its 35th Liga title three weeks ago. Since then in three more or less meaningless games, coach Carlo Ancelotti has rotated his squad to keep his players fresh while reducing the risk of injury.

Madrid hosts Real Betis on Friday to close the season at the Santiago Bernabéu, which has witnessed three spectacular comebacks in the Champions League knockout rounds. Victories over Paris Saint-Germain, Chelsea and, most recently, Manchester City earned Madrid a place in the May 28 final in Paris.

Granada, Mallorca and Cádiz will vie to see which one ends up in unwanted 18th place and join the already relegated Levante and Alavés.

Cádiz is in the most danger of the drop and will need to overhaul either Granada or Mallorca to save itself at the wire. Granada has 37 points and Mallorca and Cádiz both have 36. Mallorca holds the tiebreaker with Cádiz on their head-to-head record.

All three play their games on Sunday at the same time.

When Granada hosts Espanyol, a win will be enough to remain in the top-flight. Espanyol, which is playing under a caretaker coach, has won only once in 18 away matches in the league.

"If we start thinking about what is going on in the other games it will be a mistake. We have won the right to control our fate," Granada defender Víctor Díaz said. "We have to stay calm, play with the right amount of pressure and not go crazy."

Mallorca visits Osasuna also seeking a victory to stay up.

"We depend on ourselves to get the three points. If we get them in Pamplona we won't need help from anywhere else," Mallorca defender Jaume Costa said. "We know that it will be tough because experience tells us that Osasuna is always a fighting side and they will want to finish the season well in front of their fans."

Cádiz visits Alavés needing a win and for one of its rivals to lose.

Either Villarreal or Athletic Bilbao will finish in seventh place and earn the berth for the Europa Conference League.

Villarreal is one point ahead of Bilbao. Villarreal plays at Barcelona on Sunday, while Bilbao is at Sevilla.

The Champions League berths have been locked up by Madrid, Barcelona, Atlético Madrid and Sevilla. Betis and Real Sociedad will go to the Europa League.