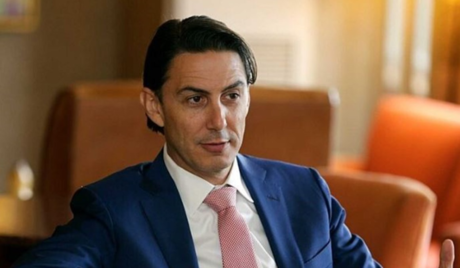 Following his arrival, Hochstein held talks with Deputy Speaker Elias Bou Saab at the latter's residence in Rabieh. He was accompanied by U.S. Ambassador to Lebanon Dorothy Shea.

Noting that he told Hochstein that the Lebanese stance over the sea border demarcation file is "unified," Bou Saab added that the meeting was "positive" and that the U.S. mediator "expressed desire to help."

Bou Saab later threw a dinner banquet in honor of Hochstein, Shea and the accompanying delegation.

Speaking to al-Manar TV, Ibrahim said his meeting with the U.S. envoy was "good."

He added that he told Hochstein that President Michel Aoun will inform him in their meeting on Tuesday of "Lebanon's unified stance over the maritime border demarcation file."

In addition to his meeting with Aoun, Hochstein will meet Tuesday with Speaker Nabih Berri and caretaker PM Najib Miqati.

Aoun and Miqati had urged Hochstein to visit Beirut to mediate over the border dispute after Israel moved a gas production vessel into an offshore field, a part of which is claimed by Lebanon. Lebanon cried foul after the ship operated by London-listed Energean Plc arrived in the Karish gas field on Sunday.

Lebanon and Israel had resumed negotiations over their maritime border in 2020 but the process was stalled by Lebanon’s claim that the map used by the United Nations in the talks needed modifying.

Hochstein was born in Israel. His parents were American Jewish immigrants.[7] He served in the Israel Defense Forces from 1992 to 1995. After finishing his army service, Hochstein moved to Washington, D.C. after receiving an internship on Capitol Hill.

Like most Jews, like the Jews in my family, they’re ethnically Europeans. Neo-Zionism is a scam to steal land.

Does anybody know when this line 29 emerged for the first time? Are there historical sources that prove that somehow this is a legitimate claim?