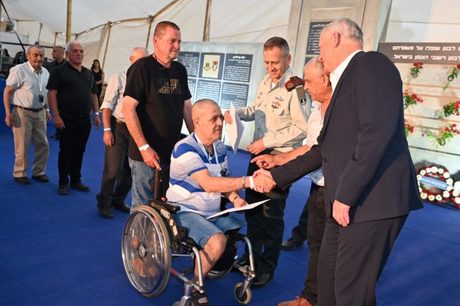 The decision, passed by the government, would see some 400 former SLA fighters who did not hold commanding ranks receiving a one-off grant of 550,000 shekels (around $161,000) towards buying a home over the next four years, the Israeli army said in a statement.

Defense Minister Benny Gantz said he was "proud" of the approval, hailing it as "historic justice to those who fought shoulder to shoulder with us, and were uprooted from their homes and homeland."

The army said the grant provides "a solution for the housing shortage of around 400 families that were not properly accommodated upon their arrival in Israel," noting the assistance would be given to SLA widows too, "provided that they reside in Israel."

The SLA was formed in 1976 as a splinter from the Lebanese Army, whose ranks were divided a year after the start of the civil war. Initially it was called the Free Lebanon Army.

The conflict shifted dramatically when Israel invaded the south in 1978 to stop attacks by the Palestine Liberation Organization (PLO) emanating from Lebanon, and the militia started taking its orders from the Israeli army, which trained, funded and supported it.

When the Israeli army withdrew from southern Lebanon in 2000, thousands of SLA members and their families chose to cross the border too, for fear of reprisals from the groups they once fought -- particularly Hezbollah -- and settle in Israel or elsewhere. Others stayed and faced trial, receiving lenient sentences.

Amnesty International and other human rights groups have often accused the SLA of torturing prisoners, particularly at the notorious Khiyam Prison.

In 2019, a committee comprised of relatives of exiled SLA members estimated that between 2,400 and 2,700 Lebanese still lived in Israel.

Many SLA veterans say they feel Israeli authorities have abandoned them in their adopted home, often working in low-paying jobs and unable to return to Lebanon.

The Israeli army said the decision had been four years in the making, with a military task force also inaugurating an SLA monument and advancing a museum dedicated to the militia in Israel's north.

"We value their contribution to the combat achievements in southern Lebanon," army chief Aviv Kohavi was quoted in the statement as saying.

"Over the years we have not forgotten our allies and our moral duty to help them live a worthy and respectful life," he added.

A kid of one of these SLA terrorists recently posted "alf sa7a 3alayhon" on twitter regarding a post about how the SLA raped women systematically. Disgusting lot.

You will find idiots or idiotic comments anywhere, including on the Lebanese side of the border. Regarding systematic rape of women by the SLA, I have not seen any documentation about that, but it is well known that rape was used in the Lebanese civil war by all sides. The same goes for treatment of prisoners, unfortunately. I dont think the Lebanese prisoners in lets say Assads Syria was treated any better that in Khiam. Hezbollah seems to have found a way past that problem, they just execute those against their agenda.

The fact that you rushed to defend the SLA terrorists says all that needs to be said about you. May you stand with them on the day of judgement. Nobody here is defending Assads rapists soldiers. The issue is about israel rewarding rapists and war criminals. Hypocrite.

I just called an allegedly kid of a SLA-member an idiot, and in your eyes I am "rushing to defend". To pick up the positive, its a good thing that you don`t defend Assads rapist soldiers, now how about the Hezbollah executions/assasinations that I also mentioned? Or do you prefer to stand with them on the day of judgement?

Let me replay history for you, ever heard of saadiyat and dammour massacres by PLO, ever heard how they-PLO dragged pregnant women in Cheka behind their jeeps. Yes war is nasty and ugly but please do not make the PLO and hizbollah that assisinates the mafia way any innocence.

Is your IQ 70? Your "whataboutism" is pathetic. LF supporters are SLA light, allthough both the SLA and LF were notorious for their rapes so im not suprised by your comment. Nobody commited as many rapes as these groups and their allies. If you had a brain, you would know that this is about israel rewarding terrorists and not that nobody else ever committed crimes during the civil war or making any party innocent. Every party involved in the civil war should be dissolved. Nobody made them innocent so for you to even say that shows you have no business talking about such issues. Thats your biased hypocrite brain reacting like an ignorant uneducated villager.

Unlike your uneducated conclusion that a kid like you posted a comment and you automatically result that SLA is rapist, I reminded you of history because obviously you lacked historically data to conclude to begin with. For every action there was an equal and opposite reaction. SLA was born because of terrorists like you went after them and massacred them which left them no choice but to side with satan to defend themselves. Learn some history before you speak next time.