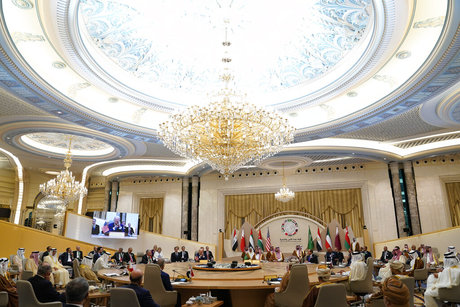 A regional summit in the Saudi Arabian city of Jeddah has brought together U.S. President Joe Biden, the six members of the Gulf Cooperation Council as well as Egypt, Jordan and Iraq.

Below is the full text of the summit's closing statement:

"1. At the invitation of the Custodian of the Two Holy Mosques, King Salman bin Abdulaziz Al Saud, King of the Kingdom of Saudi Arabia, the leaders of the Gulf Cooperation Council (GCC) member states, the Hashemite Kingdom of Jordan, the Arab Republic of Egypt, the Republic of Iraq, and the United States of America held a joint summit in Jeddah, Saudi Arabia, on July 16, 2022, to underscore the historic partnership among their countries and to deepen their countries' joint cooperation in all fields.

2. The leaders welcomed President Biden reiterating the importance the United States places on its decades-long strategic partnerships in the Middle East, affirming the United States' enduring commitment to the security and territorial defense of U.S. partners, and recognizing the region's central role in connecting the Indo-Pacific to Europe, Africa, and the Americas.

3. The leaders affirmed their joint vision towards a peaceful and prosperous region, stressing the importance of taking all necessary measures to preserve the region's security and stability, developing joint areas of cooperation and integration, collectively confronting common threats, and abiding by the principles of good neighborliness, mutual respect, and respect for sovereignty and territorial integrity.

4. President Biden reaffirmed the U.S. commitment to achieve a just, lasting and comprehensive Middle East peace. The leaders emphasized the need to bring about a just resolution to the Israel-Palestinian conflict on the basis of two-state solution, noting the importance of the Arab Initiative. They stressed the need to stop all unilateral measures that undermine the two-state solution, to preserve the historical status quo in Jerusalem and its holy sites, emphasizing the crucial role of the Hashemite Custodianship in that regard. The leaders also stressed the importance of supporting the Palestinian economy and the United Nations Relief and Works Agency for Palestine Refugees (UNRWA). President Biden commended the important roles played by Jordan and Egypt, and the members of the GCC, and their support for the Palestinian people and institutions.

5. The leaders renewed their commitment to enhance regional cooperation and integration, and build joint projects between their countries to achieve sustainable development and collectively address the climate challenge through accelerating climate ambition, supporting innovation and partnerships, including the Circular Carbon Economy Framework, and developing renewable sources of energy. In this context, the leaders commended the finalization of the agreements to connect electrical grids between Iraq and Saudi Arabia, between the Gulf Cooperation Council and Iraq, and between Saudi Arabia and Jordan and Egypt, as well as connecting the electrical grids between Egypt, Jordan, and Iraq.

7. The leaders affirmed the importance of achieving energy security and stabilizing energy markets, while working on increasing investments in technologies and projects that aim to lower emissions and remove carbon, consistent with their national commitments. The leaders also noted the efforts by OPEC + that aim to stabilize oil markets in a manner that serves the interests of consumers and producers and supports economic growth, welcomed the decision by OPEC+ to increase production for the months of July and August, and commended Saudi Arabia for its leading role in achieving consensus among the members of OPEC+.

8. The leaders renewed their support to the Treaty on the Non-Proliferation of Nuclear Weapons, and the objective of preventing the proliferation of nuclear weapons in the region. The leaders also renewed their call on the Islamic Republic of Iran to fully cooperate with the International Atomic Energy Agency, and with countries in the region to keep the Arab Gulf region free from weapons of mass destruction, and to preserve security and stability regionally and globally.

9. The leaders renewed their condemnation in the strongest terms of terrorism in all its forms and affirmed their commitment to strengthening regional and international efforts aimed at confronting terrorism and violent extremism, preventing the financing, arming, and recruitment of terrorist groups by all individuals and entities, and to confronting all activities that threaten regional security and stability.

10. The leaders condemned, in the strongest terms, the terrorist acts impacting civilians, civilian infrastructure, and energy installations in Saudi Arabia, the United Arab Emirates, and commercial ships navigating critical international trade routes, in the Strait of Hormuz and Bab al Mandab, and affirmed the need to adhere to relevant UN Security Council Resolutions, including UNSCR 2624.

11. The leaders expressed their full support for Iraq's sovereignty, security, and stability, its development and prosperity, and all of its efforts to combat terrorism. The leaders also welcomed Iraq's positive role in facilitating diplomacy and confidence-building among countries in the region.

12. The leaders welcomed the truce in Yemen, as well as the establishment of the Presidential Leadership Council (PLC) in Yemen, expressing their hope to achieve a political solution in line with the references of the GCC initiative, its implementation mechanism, the outcomes of the Yemeni comprehensive national dialogue, and UN Security Council resolutions, including UNSCR 2216. The leaders called on the Yemeni parties to seize this opportunity and engage immediately in direct negotiations under the auspices of the United Nations. The leaders also affirmed the importance of continuing to support the humanitarian needs of the Yemeni people, as well as provide economic and developmental support, while ensuring it reaches all areas of Yemen.

13. The leaders stressed the need to intensify efforts to reach a political solution to the Syrian crisis, in a manner that preserves Syria's unity and sovereignty, and meets the aspirations of its people, in accordance with UN Security Council Resolution 2254. The leaders stressed the importance of providing the necessary support to Syrian refugees and to the countries hosting them, and for humanitarian aid to reach all regions of Syria.

14. The leaders expressed their support for Lebanon's sovereignty, security, and stability, as well as all the reforms necessary to achieve its economic recovery. They noted recently-conducted parliamentary elections, enabled by the Lebanese Armed Forces (LAF) and Internal Security Forces (ISF). With a view to upcoming presidential elections, they called on all Lebanese parties to respect the constitution and carry out the process in a timely manner. The leaders praised the efforts made by friends and partners of Lebanon that have renewed and strengthened the confidence and cooperation between Lebanon and the Gulf Cooperation Council countries, and that have supported the LAF and ISF in their efforts to maintain security in the country. The leaders took particular note of Kuwait's initiatives aimed at building joint action between Lebanon and the GCC countries, and commended the State of Qatar's recent announcement of direct support for LAF salaries. The United States confirmed its intention to develop a similar program for the LAF and ISF. The leaders also welcomed the support of the Republic of Iraq to the people and government of Lebanon in the fields of energy and humanitarian relief. The leaders welcomed all friends of Lebanon to join this effort to ensure the safety and stability of Lebanon. The leaders emphasized the importance of the control of the government of Lebanon over all Lebanese territory, including with reference to fulfilling the provisions of the relevant UN Security Council resolutions and the Taif Accord, and for it to exercise full sovereignty, so there will be no weapons without the consent of the government of Lebanon or authority other than that of the government of Lebanon.

15. The leaders renewed their support for efforts to resolve the Libyan crisis in accordance with relevant Security Council resolutions, including Resolutions 2570 and 2571, the need to hold presidential and parliamentary elections, in tandem, as soon as possible, and the departure of all foreign forces and mercenaries without delay. They continue to support Libyan efforts to unify the country's military institutions under the auspices of the UN process. The leaders expressed their appreciation for the Arab Republic of Egypt's hosting of the Libyan constitutional dialogue in support of the UN-facilitated political process.

16. The leaders affirmed their support for efforts to achieve stability in Sudan, resume a successful transitional phase, encourage consensus between the Sudanese parties, maintain the cohesion of the state and its institutions, and support Sudan in facing economic challenges.

17. Regarding the Grand Ethiopian Renaissance Dam (GERD), the leaders reiterated their support for Egypt's water security and to forging a diplomatic resolution that would achieve the interests of all parties and contribute to a more peaceful and prosperous region. The leaders reiterated the imperative of concluding an agreement on the filling and operation of the GERD within a reasonable timeframe as stipulated in the Statement of the President of the United Nations Security Council dated September 15, 2021, and consistent with international law.

18. With regard to the war in Ukraine, the leaders reaffirmed the importance of respecting the principles of international law, including the UN Charter, the sovereignty and territorial integrity of states, and the obligation to refrain from the use of force and the threats of using force. The leaders urged all countries and the international community to intensify their efforts aimed at achieving a peaceful solution, ending the humanitarian crisis, and supporting refugees, displaced persons and those affected by the war in Ukraine, as well as facilitating the export of grain and other food supplies, and supporting food security in affected countries.

19. ​With regard to Afghanistan, the leaders stressed the importance of continuing and intensifying efforts to support humanitarian access to Afghanistan, to address the threat posed by Afghanistan-based terrorists, and striving for the ability of all Afghans to be able to enjoy their human rights and fundamental freedoms, including their right to education and enjoyment of the highest attainable standard of health and, particularly for women, the right to work. The leaders expressed appreciation for Qatar's role in promoting security and stability for the Afghan people.

20. The leaders welcomed the preparations by the state of Qatar for hosting the 2022 World Cup, and reiterated their support for all efforts to ensure its success.

21. The participating countries affirmed their commitment to convening again in the future."