Judge Aoun enters BDL, State Security not allowed to get in 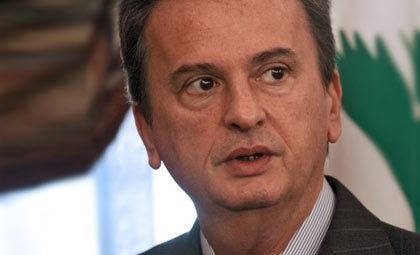 The state security forces then headed to the Central Bank headquarters in Beirut to enforce a subpoena issued by Mount Lebanon Public Prosecutor Judge Ghada Aoun. Aoun arrived later to the Bank and entered it with a number of state security agents, as the patrol was not allowed to enter the bank by Beirut Public Prosecution Judge Raja Hamoush.

Aoun had issued the subpoena against Salameh in February after he failed to show up for a third interrogation session in a lawsuit filed against him by the People Want to Reform the System group. She pledged that she "will continue to pursue Salameh until he is brought to justice."

How can this crook still be a Central Bank Governor when he is never to be found neither at the office or at home?

If a viper bites Ghada Aoun, the viper will die of poison. This trinity of Useful idiots from Michel Aoun, worst ever president in universe; Don Quixote Bassil, a disgusting evil political prostitute; and Ghada Aoun, a sadistic satanic snake are the worst locust on Lebanon leaving behind utter desolation and despair all over the land. Whereas criminal HizbIran got everything they want to swallow Lebanon piece by piece, and weaken Christians and Sunnis, and destroy our institutions and reputation; the only thing this trinity got in return is marionette presidency, ministries for son-in-law to steal billions while leaving country with no power, and free reign of Ghada destroying Christian families while protecting HizbIran’s illegal crossings, money laundering, drug and captagon trade, criminal mercenaries convicted in international courts, and rule of jungle. They have enslaved Lebanon to the Basij but Lebanon will be free again and their day of justice has arrived.

Ghada Aoun is not a Judge. She's a KGB, Gestapo, SS, Stassi type Fascist. I have never ever seen a judge anywhere in any country who takes a bunch of security along with them and go raid a private citizen's home.

Say what you want about Riad Salameh, but this type of action by this so called judge tells you all you need to know. This is not justice. It's henchman ru mobster rule.

It’s all a show for the plebeians … don’t get fooled, they’re all providing a distraction whilst they rob what’s left of our money in the banks’ coffers.