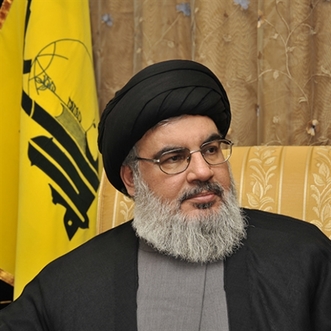 Hezbollah chief Sayyed Hassan Nasrallah has said that the possibility of an imminent war with Israel is “not certain,” in connection with the current standoff over offshore gas fields.

“The historic moment to rescue Lebanon is in the hands of the resistance,” Nasrallah said overnight during his annual meeting with Ashoura sermon deliverers.

“There will be no oil extraction across the Israeli entity if Lebanon does not obtain its rights,” Nasrallah added, according to remarks published Wednesday in the pro-Hezbollah al-Akhbar newspaper.

Noting that war is “not certain,” Nasrallah said: “We’re not sure that we’re heading to a war. We might witness a surgical attack and a proportionate response, and the issue is related to the response of the Israelis, which might push things gradually to war.”

“But the Israelis might bow even without a war,” Nasrallah added.

“We might be heading to a war and might not be. It is not our desire to open a front. We only want our rights and we’re escalating our rhetoric so that the Americans and Israelis submit, because the course of the collapse in Lebanon is continuing,” Hezbollah’s leader went on to say.

Referring to the shuttle diplomacy of U.S. mediator Amos Hochstein, Nasrallah said the latter “has not yet brought a clear answer, although Lebanon has offered major concessions.”

“Lebanon has not obtained the least of its demands,” Nasrallah noted.

“We hope not to fire a bullet or a rocket and for the enemy to back down. We are awaiting developments and we’re ready for everything,” Hezbollah’s leader added.

“Today the enemy is feeling weak and it does not want war. It knows that the war would not only be with Hezbollah but might escalate to be with the entire axis in a manner that would destroy it,” Nasrallah said.

He added: “We might obtain our rights with or without a war and the Israelis might bow without any act from the resistance. They might also respond and things might descend into war, but we’re concerned with taking a risk and a difficult stance.”

As for his latest speech, Nasrallah said “it led to confirming the negotiations and not to obstructing them.”

“There are positive signs and we’re still waiting, but there has been no answer from the enemy until today,” he added.

And stressing that Lebanon is before “a historic and golden chance to overcome its crisis,” Nasrallah warned that “if we don’t make use of it, we might not extract oil for the next 100 years.”

“We are not searching for a moral achievement through blocking extraction from the (Israeli-controlled) Karish field. We only want to extract our oil, that’s why there will be no extraction of oil and gas in the entire (Israeli) entity if Lebanon does not get its rights,” Hezbollah’s leader added.

God bless our Shia resistance and its blessed leader Hezbollah chief Sayyed Hassan Nasrallah for escalating our rhetoric so that the Americans and Israelis submit. Our blessed leader is a known master strategist who knows the impact of his words on the Zionist enemy and the American imperialists. Our Sayyed knows his words and rhetoric are more than enough to plant fear and panic at the highest levels within the aging U.S Administration. Our Sayyed words are more effective and powerful than both the Israeli and American nuclear arsenal as events have proven. Today, we are closer to liberating Palestine than ever before which in itself is causing panic and fear in the hearts and minds of the Israelis and their American sponsors.

"Today, we are closer to liberating Palestine than ever"
As far as the whole world, with the single exception of Hizballah and their masters Iran, knows, they have not advanced a single millimeter since 1948.
Many Moslem states such as UAE, Egypt, Morocco, Bahrein and Saudi Arabia have advanced into the 3rd decade of the 21st Century, whereas the only success Hizballah is that it has pulled Lebanon back to somewhere in the middle of the 20th with no possibility of advancement.

fear and panic in the hearts of Israelis and American sponsors. hahahahhha what a fricken joke you are
Is that why your jardone lives in the sewer!?
blah blah blah...

"Resistance", in all its forms, is a lie. Knowingly telling lies to true believers is haram.

Sure, but since their subcult is in itself a heresy, the rhetorical question of the day being : Is telling lies to heretics haram?

Egypt built new modern capital and cities plus advanced manufacturing and irrigation; UAE sent a probe to Mars and becoming an international hub for important conferences; Saudi is being transformed by the day with 2030 new vision and Neom zero carbon city... and this criminal Nassrallah and his masters the Iranian Basij are only talking about wars and rockets. Any respected country would have put him and his followers in prison for Grand Treason. Unfortunately, we only have incompetent corrupt midgets in power, not to mention FPM the mother of all corruption, nepotism, mismanagement having sold our country and honor to the Basij for 30 pieces of silver. Wake up people!

That Iranian dude is funny. Does he have a regular show like Mr Bean?