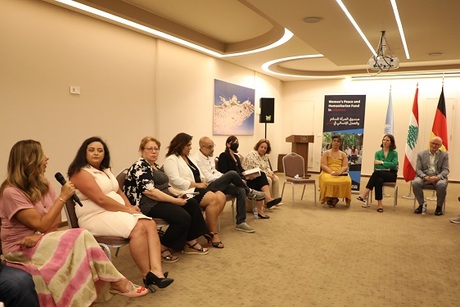 The Women’s Peace and Humanitarian Fund (WPHF) together with the United Nations in Lebanon has launched the second window of its financial support to eight women-led organizations in Lebanon that are working on community peacebuilding in Lebanon, as part of strengthening their institutional capacity and maximizing peacebuilding results.

“The WPHF is a flexible and rapid financing tool supporting quality interventions to enhance the capacity of local women around the world to prevent conflict, respond to crises and emergencies, and seize key peacebuilding opportunities,” U.N. Lebanon said in a statement.

“There cannot be any sustainable peace, security, or development without the effective participation of women, in all their diversity. Their meaningful participation is also not possible if funding and support are not provided to those working in their own communities, to build a culture of peace,” it added.

“Women continue to have to fight for their voices to be heard, despite abundant evidence on the link between women’s participation and peace. We need more women in decision-making and in peacebuilding efforts to ensure Lebanon’s sustained recovery,” said the U.N. Resident and Humanitarian Coordinator for Lebanon, Najat Rochdi. “Congratulations to the eight women-led organizations and our sincere thanks and gratitude to the Government of Germany for its steady support, which is much-needed for Lebanon’s recovery and development,” she added.

Supported by the Government of Germany, with complementary funding from the Government of Finland, the WPHF in Lebanon will provide funding to eight local women’s rights organizations. The WPHF’s second Call For Proposal was open from February 1 to mid-March 2022 whereby a total of 42 proposals were submitted, of which 13 were shortlisted, representing a variety of feminist and women and youth-led organizations. The shortlisted proposals were thoroughly reviewed by the National Steering Committee, which endorsed 8 new projects, on 26 April 2022.

This second window of the WPHF in Lebanon simultaneously seeks to support, through unearmarked funds, the institutional strengthening of women-led and community-based organizations working on peacebuilding efforts at the local level, while providing funding for specific peacebuilding initiatives.

“We owe it to those championing peace on the frontlines to provide them with timely and accessible funding that is responsive to their realities,” stated Rachel Dore-Weeks, Head of U.N. Women in Lebanon at the launch of the second window.

The first window of the WPHF was launched in Lebanon after the 2020 Beirut Port Explosion. The 6 grantees and 1 sub-grantee funded under the first window led recovery initiatives within their communities, rebuilding community centers, partnering with security institutions to invest in disaster risk preparedness, and supporting accountability tools for women’s inclusion in Lebanon’s recovery process. This second window builds on the work of the first-phase grantees who have also established mentoring relationships with those beginning their work under this second phase.

The work funded, which will begin in August 2022 and run through to December 2023, seeks to build peace through advocacy, art, and women-led peace spaces, dialogues, and student clubs.

“Less than two years ago, Germany decided to help set up the Women’s Peace and Humanitarian Fund in Lebanon with the aim of strengthening small grassroots women-led organizations. The WPHF has indeed lived up to the expectations and delivered impressive work in its first round. We are all proud of the 7 inspiring organizations we have so far partnered with and wish the new participants success. Germany renews its trust in the fund and in the civil society organizations that have courageously stepped up in response to Lebanon’s enduring crisis,” stated Andreas Kindl, the German ambassador to Lebanon.

The Women’s Peace & Humanitarian Fund (WPHF) is the only global financing mechanism dedicated exclusively to supporting women’s participation in peacebuilding and humanitarian action. WPHF is a flexible and rapid financing tool supporting quality interventions to enhance the capacity of local women to prevent conflict, respond to crises and emergencies, and seize key peacebuilding opportunities. WPHF is an innovative partnership between Member States, the UN, and civil society, with all stakeholders represented on its global Funding Board. UN Women provides secretariat support to WPHF and ensures coordination to implement the decisions of the Funding Board. WPHF donors currently include Australia, Austria, Belgium, Canada, Estonia, European Union (Spotlight Initiative), Germany, Ireland, Japan, Liechtenstein, Lithuania, Netherlands, Norway, Spain, Sweden and the United Kingdom. WPHF is actively supporting over 345 local women’s organizations across 22 of its 25 eligible countries and has mobilized a total of $58 Million USD for grassroots women’s rights and women-led organizations working in settings of conflict and humanitarian emergency.

About the selected NGOs:

• SEEDS is a women-led human rights organization, and a phase 1 WPHF grantee. Under Phase II, the organization will receive institutional funds to support it to retain key personnel, engage in strategic planning and raise new resources.

• Haven for artists (H4A) is a grassroots feminist art organization working at the intersection of art and activism, and a phase 1 WPHF grantee. Institutional funding will be provided to the maintenance of Haven House, the cultural community center, and the development of a new strategic and financial long-term strategy.

• Abnaa Saida El Balad is a women-led youth organization in Saida. As a new recipient of the WPHF, funds will support the organization’s core activities and the organization to develop an adaptative strategy and a detailed plan for its gender equality program.

• Committee of Employee Women Union (CEWU) is a women's rights/led organization focused on equality issues. Support from the WPHF aims to politically empower women and young women through skills building on promoting peace and conflict resolution in their communities, as well as public debating and mediation.

• SEENARYO utilizes participatory theatre for the empowerment of communities, partnering with Women Now for Development. The project will target local Lebanese and refugee women living in the Bekaa, as well as community leaders from local municipalities and CSOs, with the aim of supporting the integration of women’s voices and priorities into local decision-making.

• Green villages promotes women's economic empowerment through ecological solutions while promoting women’s activism. The project funded by the WPHF will work in remote and border Syria, bringing together women's groups to discuss about different issues affecting their communities, and engage with local authorities.

• Women alive works in the north of Lebanon. The project promotes peacebuilding and women's participation and engagement. It will target female university students in clubs and the broader public through campaigns and dialogue with municipalities on topics of gender-based violence, peacebuilding, and political rights.

• Lebanese Family Planning Association for Development & Family Empowerment (LFPDA) is a women/youth rights organization. Work funded under the WPHF seeks to increase women's political participation at the municipal level in 15 villages in the regions of Tyre and West Bekaa.