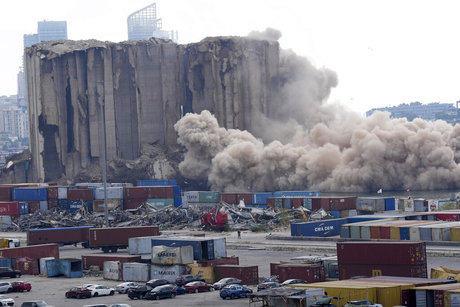 A large section of Beirut's giant port grain silos, shredded by a massive explosion two years ago, collapsed on Thursday as hundreds marched in Beirut to mark the second anniversary of the blast that killed scores.

The northern block of the silos consisting of four towers has been slowly tilting for days and collapsed causing a huge cloud of dust that covered the structure that shielded Beirut's western neighborhoods when the blast occurred on Aug. 4, 2020 killing nearly 220 people, injuring over 6,000 and causing damage worth billions of dollars.

Thursday's collapse of roughly a fourth of the structure occurred an hour before hundreds of people were to gather outside the facility to mark the 2nd anniversary of the blast. Authorities have evacuated parts of the port earlier this week -- after an initial section of the silos collapsed on Sunday -- as a precautionary measure and there was no indication that anyone was hurt.

The 50 year-old, 48 meter tall silos had withstood the force of the explosion two years ago that destroyed much of the port. Many in Lebanon, including families of the victims, have been demanding that the silos be kept for future generations to witness the result of one of the largest non-nuclear explosions in history caused by widespread corruption and mismanagement in the small Mediterranean nation.

Experts had been warning for days that the silos could collapse imminently after recording unprecedented inclination rates.

"I'm seeing the same sight, from almost the same place, after two years," she told AFP, holding back tears. "Its traumatic."

The heavily damaged silos have become a grim reminder of the August 4, 2020 explosion of a stockpile of ammonium nitrate fertilizer that had caught fire.

The anniversary came amid calls for an international investigation into one of the largest non-nuclear explosions in history. The domestic investigation has been stalled since December following legal challenges by charged and accused officials against the judge leading the investigation.

Hundreds of people, including families of the victims, marched from three locations in Beirut toward the main road outside the port to mark the blast that occurred at 6:07 p.m. two years ago. Some carried white coffins with name of some of the victims while others carried gallows demanding punishment for those responsible.

"Two years later the pain is still the same," said one of the family members who lost his brother.

The protests also involved a sit-on outside the French embassy in Beirut. French President Emmanuel Macron "has not fulfilled his promises and we call on France to form an international fact-finding mission," a spokesperson for the families said.

And outside parliament in downtown Beirut, security forces fired three stun grenades after some protesters hurled coffins and firecrackers at one of Nejmeh Square's entrances.

Two years after the explosions, none of the top politicians have apologized to the Lebanese and the government called for a day of mourning leading many businesses to close.

"The silos are our memory" said Wafaa Zaher, a 60-year-old whose son died at the port during the explosion.

"We are waiting for the truth to cool our hearts," she said from the protest.

This is just unbelievable.

This is what happens when you don't have a government.