Nasrallah says Bitar blocking investigation by not stepping down 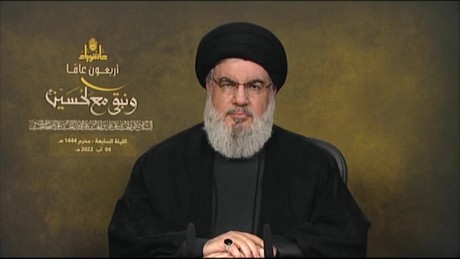 Hezbollah chief Sayyed Hassan Nasrallah on Thursday decried "the ugly political exploitation against the resistance" in connection with the Beirut port blast case.

"The propaganda is still continuing against Hezbollah, although we have clarified that we had nothing to do with the ship and the nitrates," Nasrallah added during a Ashoura sermon.

"The resistance has original and military explosives and it doesn't need ammonium nitrate to manufacture explosives," Nasrallah noted.

Accusing the judiciary of "political exploitation," Hezbollah's leader said port blast investigator Judge Tarek Bitar is "obstructing the probe because he has not stepped down."

Nasrallah also alleged that "there are officers and judges responsible for the port incident who have not been interrogated."

He accordingly called for "returning to honest judicial work and opening the judicial course anew in order to hold accountable those responsible for this crime."

God bless our Shia resistance and its blessed leader Sayyed Hassan Nasrallah for seeking justice and honest judicial due process. Throughout its glorious history, our Shia resistance has stood by the truth, advocated justice, and demanded fairness. We all remember the resistance' stance at every junction from Rafik Harriri to Lukman Slim and Joe Bijani's assassination.

Our Shia resistance will not compromise on its convictions whether it is the battlefield, the environment or LGBQT rights.

As our blessed Mahdi once said: "The truth shall set you free", our Shia resistance adherence to the truth shall protect Lebanon's sovereignty and independence.

"The propaganda is still continuing against Hezbollah, although we have clarified that we had nothing to do with the ship and the nitrates,"

Lol at propaganda---how has he clarified this other than his usual INSISTENT and DENY routine. Maybe they should provide actual proof--not some unsubstantiated garbage coming from his speeches.

The problem with that idea is that only Nasrallah would be allowed to land somewhere else, and that being Iran. The others wouldn't be allowed in anywhere.

The Iranian mullah gave a good speech though. You have to admit that although it’s full of falsities. Give him a break.