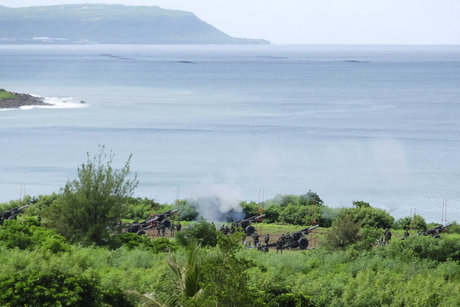 Taiwan's foreign minister said Tuesday that China aims to control the East and South China Seas via the Taiwan Strait, describing a greater ambition to upend the Asia-Pacific status quo and prevent nations from aiding the self-governing island.

Foreign Minister Joseph Wu spoke at a news conference in Taipei as Taiwan began live-fire military drills to test combat readiness in response to ongoing Chinese exercises that have included launching missiles into waters off the island of 23 million people.

China says its drills were prompted by the visit to the island last week by U.S. House Speaker Nancy Pelosi, but Wu said China was using her visit as a pretext. China also banned some Taiwanese food imports after the visit and cut off dialogue with the U.S. on several issues including climate change.

He said China aims to upend the status quo and annex Taiwan, the self-governing island republic it claims as its own territory.

The drills are a rehearsal for an invasion of the island in which it seeks to prevent other countries coming to the island's assistance, Wu said.

"China has no right to interfere in or alter" the Taiwanese people's democratic process or interaction with other nations, he said.

Taiwan and the mainland are separate jurisdictions with "neither subordinate to the other," Wu said.

Since Thursday, China has sent military ships and planes across the midline in the Taiwan Strait and launched missiles into waters surrounding the island. Ignoring calls to calm tensions, Beijing has extended the exercises that amount to a blockade without announcing when they will end.