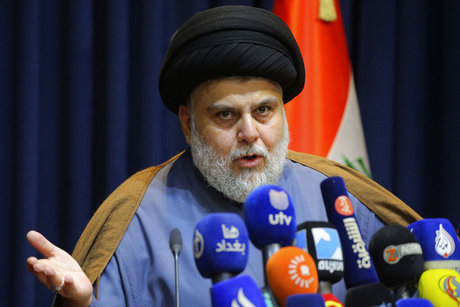 An influential Shiite cleric in Iraq whose supporters earlier this month stormed the parliament in Baghdad and have since held a sit-in outside the building, has stepped up his demands and issued a veiled threat of renewed violence.

The cleric, Muqtada al-Sadr, said on Twitter that the judiciary has one week to dissolve the legislature. Al-Sadr has previously demanded that the parliament be dissolved and that early elections are held but this time, he set a deadline.

Experts are divided on whether al-Sadr has any legal basis for his demands. He won the largest share of seats in the election last October, but failed to form a majority government that excluded his Iran-aligned rivals.

Al-Sadr called his followers "revolutionaries" and said "they will take another position" if his demands were not met, hinting at possibly escalating the protest.

Al-Sadr's political rivals in the Coordination Framework, an alliance of Iran-backed parties, said earlier that the parliament would have to convene to dissolve itself.

Last week, thousands of al-Sadr's followers stormed the heavily fortified Green Zone, which houses Iraq's parliament, government buildings and foreign embassies. They overran and occupied the parliament, after which all sessions of the assembly were cancelled until further notice. The takeover also effectively halted efforts by the Coordination Framework to try and form the next government after al-Sadr failed to do so.

Iraq's political impasse, now in its tenth month, is the longest in the country since the 2003 U.S.-led invasion reset the political order.

In their takeover of parliament, al-Sadr's followers stopped short of overrunning the Judicial Council building next door — an act that many consider a coup as the judiciary is the highest legal authority in the country.