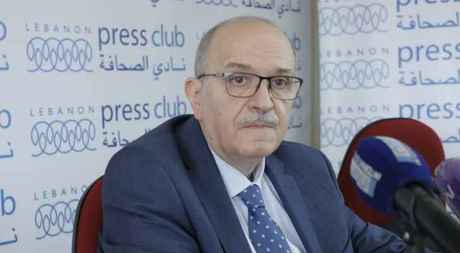 The head of the Federation of Syndicates of Banks Employees in Lebanon, George al-Hajj, announced Thursday that the employees will not declare a strike in response to the hostage crisis at Federal Bank’s Hamra branch.

“All that we want is for this incident to end peacefully,” al-Hajj said.

“We will not resort to a strike because it would be useless, but I will hold talks with the Interior Ministry in order to provide protection for banks,” al-Hajj added.

Earlier in the day, a depositor armed with a shotgun took employees and customers hostage at Federal Bank’s Hamra branch, threatening to set himself on fire with gasoline unless he received his trapped savings.

A customer at the bank who fled the building told local media that the gunman was demanding to withdraw $2,000 to pay for his hospitalized father's medical bills. Local media reported that he had about $200,000 stuck in the bank.

Hussein's brother Atef, standing outside the bank, told The Associated Press that his brother would be willing to turn himself in if the bank gave him money to help with his father's medical bills and family expenses.