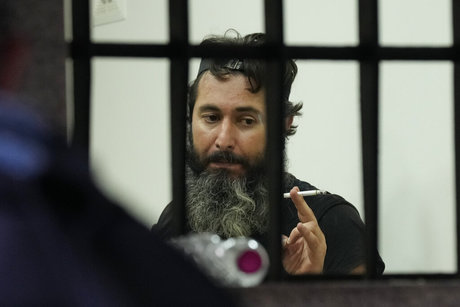 The family of Bassam al-Sheikh Hussein, a 42-year-old man who held bank staff hostage for hours Thursday, blocked the Ouzai road in protest of a judge's decision to arrest Bassam.

Judge Ghassan Khoury ordered at night the arrest of Hussein, after he was promised during negotiations as he was still in the bank that he would not be arrested.

Hussein had $210,000 trapped in Federal Bank and had been struggling to withdraw his money to pay his father’s medical bills and other expenses, according to the family and others involved in the negotiations.

Bassam had sold his house and his parents' house, his mother said on TV, and deposited all the money at the bank.

"This is our money, it is our right," she said. "They stole our money, Bassam is not a thief, the banks are."

The hostage drama in the city’s bustling Hamra district was the latest painful episode in Lebanon’s economic free-fall, now in its third year. The country’s cash-strapped banks since 2019 have slapped strict limits on withdrawals of foreign currency assets, tying up the savings of millions of people.

Hussein’s brother Atef had shouted Thursday that his brother is not a scoundrel. "He is a decent man. He takes what he has from his own pocket to give to others," he said.

Bassam was hailed as a hero by many who gathered to support him outside the bank. His photo circulated on social media with a phrase he said to the cheering bystanders when he turned himself in "Take your right with your own hands, these are lying bastards."