1 dead, 20 hurt, many under rubble in suspected fireworks blast in Yerevan 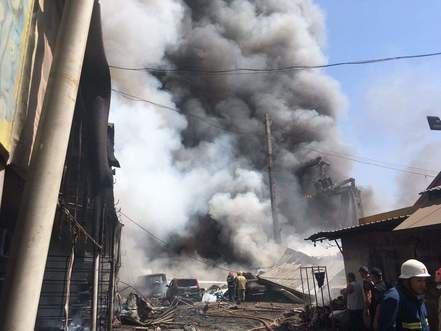 A strong explosion hit a large market in Armenia's capital on Sunday, setting off a fire and reportedly trapping people under rubble. The blast killed one person and injured 20, according to the emergency situations ministry.

The Interfax news agency cited Armenia's emergency service as saying the explosion occurred in a building at the Surmalu market where fireworks were sold. The market is about two kilometers south of the center of Yerevan.

Russia's state news agency Tass cited the city's mayor as saying an unspecified number of people were trapped in rubble.

Photos and videos posted on social media showed a thick column of black smoke over the market and successive detonations could be heard.

The ministry said there were 10 firefighting trucks on the spot and another 10 were on their way.