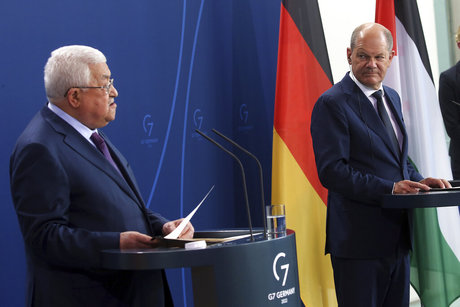 Speaking at a joint news conference with Scholz in Berlin, Abbas on Tuesday accused Israel of committing "50 Holocausts" against Palestinians over the years. Scholz, who was standing next to Abbas, didn't immediately react to the comments but later strongly criticized them.

"The chancellor emphasized that he sharply condemns any attempt to deny or relativize the Holocaust," Scholz spokesman Steffen Hebestreit said.

"The comments by President Abbas in Berlin were intolerable and completely unacceptable to (the chancellor) and the entire German government," Hebestreit said.

"Keeping alive the memory of the civilizational rupture of the Shoah is an everlasting responsibility of this and every German government," he added, referring to the Holocaust by the commonly used Hebrew word.

Post-war German governments have long argued that the word Holocaust refers to a unique crime: the systematic murder of 6 million European Jews by the Nazis and their henchmen during the Third Reich.

On Wednesday, Abbas appeared to walk back his comments. His office said in a written statement that the Palestinian leader's reference "was not intended to deny the singularity of the Holocaust that occurred in the last century."

While Abbas' remarks drew outrage in Europe, the United States and Israel — Lapid called them "not only a moral disgrace, but a monstrous lie" — Scholz received criticism as well for not intervening immediately at the news conference held at his chancellery.

"That a relativization of the Holocaust, especially in Germany, at a press conference in the Federal Chancellery, goes unchallenged, I consider scandalous," said Josef Schuster, the head of the Central Council of Jews in Germany.

Abbas' comments came in response to an Associated Press question about the the 50th anniversary of the attack by Palestinian militants at the 1972 Olympic Games in Munich, which resulted in the death of 11 members of the Israeli team and a German police officer.