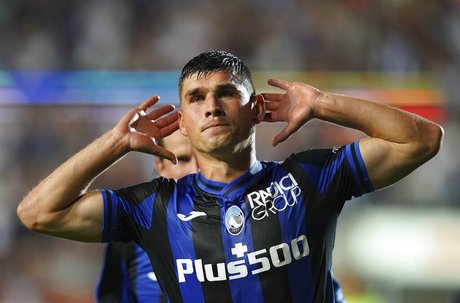 Atalanta held defending champion AC Milan 1-1 in their Serie A clash on Sunday, while Georgia winger Khvicha Kvaratskhelia scored twice to lead Napoli to a 4-0 win over promoted Monza.

The 21-year-old Kvaratskhelia, who also scored on his league debut in Napoli's 5-2 win at Hellas Verona, took his tally to three goals in two games since joining from Dinamo Batumi. Kvaratskhelia had been playing for Russian team Rubin Kazan up to March, but joined Batumi following Russia's invasion of Ukraine.

Napoli dominated the opening half in its first league game at home this season, but its fans had to wait till the 35th minute for Kvaratskhelia to unlock the Monza defense with a curling shot inside the right post from distance.

Victor Osimhen raced down the right and held off a defender to make it 2-0 in first-half injury time.

Osimhen headed just over after the break before Kvaratskhelia produced another moment of brilliance to score in the 62nd. Facing two defenders, he eluded both before firing inside the far post.

Andrea Petagna thought he'd pulled one back for Monza but the goal was ruled out through VAR for a foul.

South Korea defender Kim Min-jae wrapped up the scoring with a header in the third minute of injury time.

Milan was frustrated by a stubborn defense from Gian Piero Gasperini's Atalanta team, which seized the lead through Ruslan Malinovskyi's fierce shot in the 29th.

Joakim Maehle played the ball back for the Ukrainian to unleash the ball with his favored left foot past Milan goalkeeper Mike Maignan with the help of a slight deflection.

Malinovskyi's inclusion in the starting lineup was a surprise amid transfer speculation linking him to Tottenham, Nottingham Forest and Marseille. Reports had also suggested he was no longer in favor with the coach.

Gasperini's team was forced back for much of the game, but his defense managed to keep most of the danger at bay as the visitors struggled to break through.

Maignan denied Mario Pasalic with a good save early in the second half, before his Atalanta counterpart Juan Musso did brilliantly to deny Sandro Tonali in a one-on-one. The Milan midfielder should have scored.

The visitors' pressure eventually paid off when Ismael Bennacer equalized with a brilliant shot in off the far post in the 68th.

Fiorentina drew at Empoli 0-0 in their Tuscan derby. Empoli defender Sebastiano Luperto was sent off in the 66th for a tactical foul on Luka Jovic. Empoli finished the game with nine players because of an injury to Nicolo Cambiaghi.