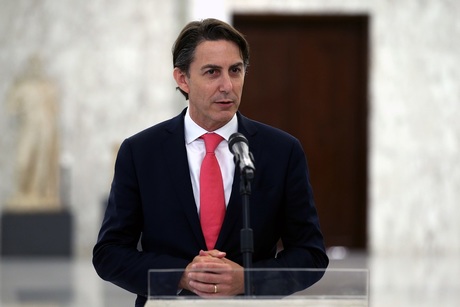 “I think we’re making very good progress and I’m very hopeful that we can reach an agreement,” Hochstein said after meeting President Michel Aoun in Baabda.

Speaking at the Rafik Hariri International Airport at the end of his visit to the country, Hochstein said: "I really feel that we're making progress these last few weeks and I hope to make additional progress and materialize this for an agreement that at the end of the day will give hope and economic activity in Lebanon (and) bring stability to the region, and I think this will be good to all involved."

"I'm very hopeful with what I heard today, with what we discussed today, but still more work needs to be done," the U.S. mediator said.

He added that the United States is "committed to work to resolve the issues that remain to be able to see if we can reach an agreement that will benefit the people of Lebanon."

"At the end of the day that's the goal that we have in mediating this dispute," Hochstein went on to say.

Mikati's office said in a statement that the two discussed ideas that Hochstein brought with him, adding that Lebanese officials will study them and "give an answer soon."

A Lebanese official who attended the talks told The Associated Press that the proposal put forward by the U.S. envoy gives Lebanon the right to the Qana field, which is partly in Israel's domain. A part of it stretches deep into the disputed area. The official added that the main point now is how to draw the demarcation line in a way that stretches south of Qana.

In 2017, Lebanon approved licenses for an international consortium by France's Total, Italy's ENI and Russia's Novatek to move forward with offshore oil and gas development for two of 10 blocks in the Mediterranean Sea, including one that is disputed in part with neighboring Israel.

The official, who spoke on condition of anonymity in line with regulations, said that France's Total said that as soon as a deal is reached it will start exploration in the border area.

Last month, Novatek announced it is withdrawing from the consortium. Lebanese media reported that a Qatari company will take over from the Russian firm.

The dispute which involves competing claims over offshore gas fields escalated in June after Israel moved a production vessel near the Karish offshore field, which is partly claimed by Lebanon.

Energean, the London-listed company licensed by Israel to extract gas from Karish, said on Thursday that gas would begin flowing within weeks, despite the disagreement.

Lebanon and Israel, whose border is U.N.-patrolled, have no diplomatic relations. They had resumed maritime border negotiations in 2020 but the process was stalled by Beirut's claim that the map used by the United Nations in the talks needed modifying.

Israel claims the field lies in its waters and is not part of the disputed area subject to ongoing negotiations.

A Lebanese official in mid-June said Beirut had made a new offer to Hochstein, holding back on demands for territory where Israel planned to imminently extract gas.

Beirut was pushing for the country's maritime border to exclude Karish and include the nearby Qana field, instead, the official told AFP at the time.

In a statement on Thursday, Energean said the "Karish project is on track to start production within weeks."

Hezbollah, which launched drones towards the Karish gas field in July, had threatened attacks if Israel proceeds with gas extraction in the disputed area.

All are in agreement: Hezbollah is irrelevant; "Resistance" is irrelevant; threats of corrupt intransigence are irrelevant. The path forward is known, timely, and assured.

After stepping with the left foot, the next move will be to step with the right, and then ...