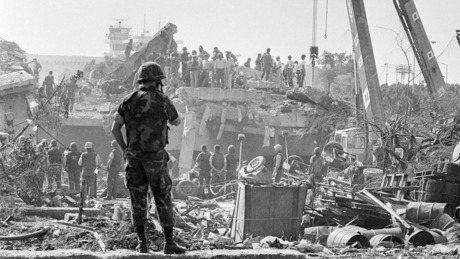 The United States on Wednesday urged the International Court of Justice to throw out a case brought by Iran seeking to claw back around $2 billion worth of frozen Iranian assets that the U.S. Supreme Court awarded to victims of a 1983 bombing in Lebanon and other attacks linked to Tehran.

The leader of the U.S. legal team, Richard Visek, told the U.N. court that it should invoke, for the first time, a legal principle known as "unclean hands," under which a nation can't bring a case because of its own criminal actions linked to the case.

"Iran's case should be dismissed in its entirety based on the principle of unclean hands," Visek told the judges sitting in the court's Great Hall of Justice.

"The essence of this threshold defense is that Iran's own egregious conduct, its sponsorship of terrorist acts directed against the United States and U.S. nationals, lies at the very core of its claims," Visek said.

The Hague-based court has never used the "unclean hands" defense as a reason to toss out a case, but it has been successfully cited in international arbitration cases, Visek said.

"The United States submits that if there was ever a case for application of the principle of unclean hands -- one that we recognize should be considered only in narrow circumstances -- it is this case," Visek said.

On Monday, Iran said the U.S. asset confiscation was an attempt to destabilize the Tehran government and a violation of international law.

Iran took its claim to the world court in 2016 after the U.S. Supreme Court ruled that money held in Iran's central bank could be used to compensate the 241 victims of a 1983 bombing -- believed to be linked to Tehran -- of a U.S. military base in Lebanon.

The world court ruled it had jurisdiction to hear the case in 2019, rejecting an argument from the U.S. that its national security interests superseded the 1955 Treaty of Amity, which promised friendship and cooperation between the two countries.

"The freedom of navigation and commerce guaranteed by the treaty have been gravely breached," Tavakol Habibzadeh, head of international legal affairs for Iran, told the 14-judge panel on Monday.

At stake in the case being heard this week are $1.75 billion in bonds, plus accumulated interest, belonging to the Iranian state but held in a Citibank account in New York.

Visek also told judges that Iran's claims should be rejected because the frozen assets are state holdings not covered by the treaty.

In 1983, a truck bomb detonated at a U.S. Marine barracks in Beirut, killing 241 American troops. Minutes later, a second blast nearby killed 58 French soldiers. Iran has denied involvement, but a U.S. District Court judge found Tehran responsible in 2003. That ruling said Iran's ambassador to Syria at the time called "a member of the Iranian Revolutionary Guard and instructed him to instigate the Marine barracks bombing."

The United States terminated the 1955 Treaty of Amity in 2018 in response to an order by the International Court of Justice in a separate case to lift sanctions against Iran. Then Secretary of State Mike Pompeo said withdrawing from the treaty was long overdue and followed Iran "groundlessly" bringing a complaint to the court alleging that U.S. sanctions were a violation of the pact.

Both the sanctions case and the asset confiscation case are continuing because they were filed before Washington scrapped the treaty.

The two countries have had no diplomatic relations since the 1979 U.S. Embassy takeover by militant students in Tehran.

Judges are likely to take months to issue a ruling in the case. The court's judgments are final and legally binding.

Wednesday's hearing in The Hague came on the day that U.S. President Joe Biden and Iranian counterpart Ebrahim Raisi will be giving speeches on the second day of the U.N. General Assembly 's first fully in-person meeting since the coronavirus pandemic began.