'I need my salary': Anger as Lebanese banks reopen 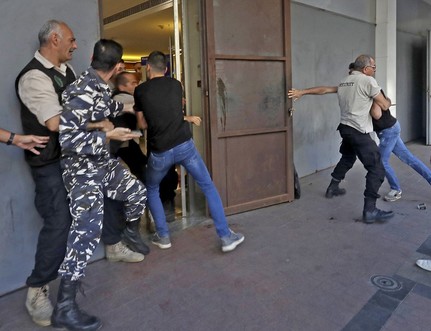 Depositors scuffled and long lines formed at Lebanese banks Monday as they partially re-opened after a week-long closure following a slew of heists by customers desperate to access their money.

But most banks remained shuttered and there was anger from those seeking to withdraw frozen funds desperately needed to weather a crushing economic crisis.

At a closed Beirut branch of Fransabank, dozens of soldiers, internal security forces members and customers had queued for hours.

"I don't care about anything, I need my salary," one ISF member yelled from behind the locked gates.

Since then, the Lebanese pound has lost more than 90 percent of its market value meaning public sector salaries have slumped to as low as $40 a month.

Earlier this month five banks were stormed in one day with depositors seeking to unlock frozen savings, after a slew of similar heists in past weeks.

The Association of Banks in Lebanon said Sunday that banks would reopen in a limited capacity to businesses, educational institutions and hospitals. Many banks have also now hired security guards.

ATMs will be available "for everyone else," to allow public and private sector institutions to transfer salaries, while depositors will also be able to make appointments for urgent matters, the banks said.

At a Beirut branch of the Fransabank branch, more servicemen and ordinary depositors queued in front of an ATM which was empty of any cash.

One man who declined to give his name said he had been waiting for two hours to withdraw his meager salary.

"I have nothing to say, I am drained," he said.

In the southern city of Sidon, heavy security has been deployed at several banks, an AFP correspondent reported, after a security forces member tried to get into a BLOM bank branch by force to retrieve his salary.