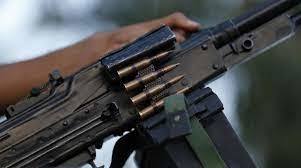 Militia infighting that erupted over the weekend in western Libya and killed at least five people, including a 10-year-old girl, continued on Monday, authorities said. It was the latest round of violence to rock the North African nation mired in decadelong chaos.

The fighting broke out on Sunday between rival militias in the western town of Zawiya, where armed groups — like in many other towns and cities in oil-rich Libya — are competing for influence.

Along with the five who were killed, at least 13 other civilians were wounded in the clashes, the Health Ministry's emergency services said.

The fighting trapped dozens of families living in the area for many hours, said Malek Merset, a spokesman for the emergency services. He said emergency services were still trying to evacuate trapped civilians.

Local media reported that one militia fired at a member of its rivals, wounding a militiaman who was taken to hospital. Footage circulating online shows heavy fire lighting up the sky at night. The clashes caused widespread panic among residents, and many government facilities and businesses in the town closed down.

Violence has regularly escalated between militias in western Libya. In August, clashes in the capital of Tripoli killed more than 30 people — one of the deadliest bouts of fighting in Libya in many months.

Libya was plunged into chaos after a NATO-backed uprising toppled and killed longtime dictator Moammar Gadhafi in 2011. The oil-rich county has now for years been split between rival administrations, each backed by rogue militias and foreign governments.

In Tripoli, Prime Minister Abdul Hamid Dbeibah has refused to step down after Libya failed to hold elections last year. His rival, Prime Minister Fathy Bashagha, operates from the eastern city of Benghazi after failed efforts to install his government in the capital.