63 blank votes, 36 votes for Mouawad, 11 for Edde in 1st round of presidential election 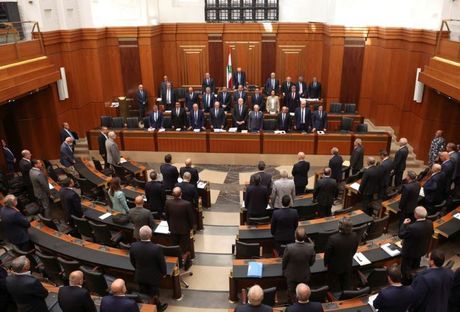 The Lebanese parliament on Thursday held a first presidential election round in which no candidate managed to garner 86 votes needed to win from the first round.

As 63 MPs cast blank ballots, 36 voted for MP Michel Mouawad, 11 voted for entrepreneur and philanthropist Salim Edde, 10 voted for "Lebanon", one voted for Mahsa Amini who died in Iranian morality police custody, and one voted for "the approach of (slain ex-PM) Rashid Karami".

Dozens of MPs walked out of the session after the results of the first round were announced, stripping the second round of the needed 86-MP quorum. This prompted Speaker Nabih Berri to announce that he will not call for another session before "consensus" is secured over a certain candidate.

The Lebanese Forces, the Kataeb Party, the Progressive Socialist Party and a number of MPs and small blocs had announced prior to the session that they would vote for Mouawad. The Change bloc meanwhile said that it would vote for Edde.

Deep divisions among MPs have raised fears that Lebanon could be left without a president for months after President Michel Aoun's mandate runs out at the end of October.

The incumbent's own election in 2016 came after a 29-month vacancy at the presidential palace as lawmakers made 45 failed attempts to reach consensus on a candidate.

Under Lebanon's longstanding confessional power-sharing system, the presidency is reserved for a Maronite Christian.

In the first round of voting, a two-thirds majority of 86 votes is required for a candidate to win. When the election goes to a second round, the required majority falls to 65.

"If there is a political vacuum, the economic crisis would intensify and there is a clear risk of security incidents," said analyst Karim Bitar.

The Lebanese pound has lost more than 95 percent of its value on the black market since 2019 in a financial meltdown branded by the World Bank as one of the worst in modern times.

The crisis has plunged more than 80 percent of the population into poverty, as food prices have risen by 2,000 percent, the United Nations has said.

Last week, France, Saudi Arabia and the United States issued a joint statement urging MPs to "elect a president who can unite the Lebanese people."

"As Lebanon’s parliament prepares to elect a new president, we stress the importance of timely elections in compliance with the constitution," the statement said.

French ambassador to Lebanon Anne Grillo called on Thursday for immediate action to lift Lebanon out of its downward spiral.

"Lebanon can get out of the crisis," she tweeted. "It is a challenge, but can and must be done."

We need to know which MPs aren’t showing up at work and votes should be electronic and not anonymous.