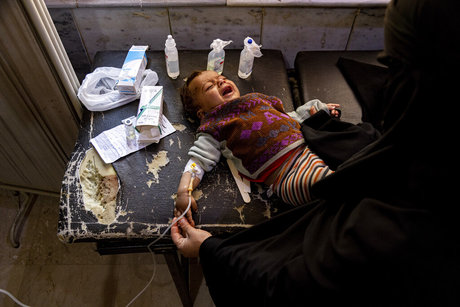 Syria's health ministry has recorded 39 deaths from cholera and nearly 600 cases in an outbreak spreading in the war-ravaged country that the United Nations warned is "evolving alarmingly."

A total of 594 cases have been recorded across 11 of its 14 provinces since late last month, the health ministry said late Tuesday.

"The situation is evolving alarmingly in affected governorates and expanding to new areas," the World Health Organization warned Tuesday.

Most of those who have died are in the northern province of Aleppo, and it was not immediately clear if the dead were included in the overall case tally.

It is the first major outbreak of cholera in Syria in over a decade.

The extremely virulent disease is generally contracted from contaminated food or water, and causes diarrhea and vomiting.

It can spread in residential areas that lack proper sewerage networks or mains drinking water.

The disease is making its first major comeback since 2009 in Syria, where nearly two-thirds of water treatment plants, half of pumping stations and one-third of water towers have been damaged by more than a decade of war, according to the United Nations.

The source of the latest outbreak is believed to be the Euphrates River which has been contaminated by sewage pollution.

Reduced water flow due to drought, rising temperatures and dams built by Turkey have compounded the pollution problem.

Despite the contamination, over five million of Syria's about 18 million people rely on the Euphrates for their drinking water, according to the U.N.

The latest outbreak is especially alarming for overcrowded displacement camps that have little access to clean water and sanitary products.

Cholera can kill within hours if left untreated, according to the WHO, but many of those infected will have no or mild symptoms.

It can be easily treated with oral rehydration solution, but more severe cases may require intravenous fluids and antibiotics, according to the WHO.

Worldwide, the disease affects between 1.3 million and four million people each year, killing between 21,000 and 143,000 people.