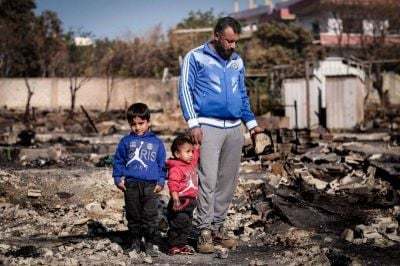 Amnesty International has urged the Lebanese authorities to reconsider their "voluntary returns" policy for Syrian refugees, saying it puts them at "risk of suffering from heinous abuse."

It comes just days after President Michel Aoun announced that the General Security agency would begin sending refugees back to Syria "in batches" starting next week, the London-based human rights group said.

"The Lebanese authorities are scaling up the so-called voluntary returns... when it is well established that Syrian refugees in Lebanon are not in a position to take a free and informed decision about their return," Amnesty's acting deputy director for the Middle East and North Africa, Diana Semaan, said.

"In enthusiastically facilitating these returns, the Lebanese authorities are knowingly putting Syrian refugees at risk of suffering from heinous abuse and persecution upon their return to Syria."

Lebanon hosts more than 1.5 million Syrian refugees who have fled more than a decade of war back home, marking the world's highest proportion of refugees per capita in one country.

This is not the first time Beirut has sought to return Syrian refugees.

In June, Prime Minister Najib Mikati said Lebanon was ready to expel Syrian refugees living in the country if the international community does not work to repatriate them.

Lebanon has been grappling with its worst ever economic crisis that has seen the Lebanese pound shed some 95 percent of its value against the dollar on the black market.

Since 2017, Lebanese authorities have organized "voluntary repatriation" programs that have seen the return of some 400,000 Syrians, according to a list of names submitted to Damascus for approval.

General Security director Maj. Gen. Abbas Ibrahim, who has organized the programs, said Thursday that the next batch of Syrians to be sent home next week would be made up of 1,600 people.

Why doesn't Amnesty take them?

Amnesty is mainly financed by western governments they organized and financed the first Gay Pride in Kiev 4 or 5 years ago… in an attempt to change Eastern European culture and traditions.

All Syrian refugees should be shipped to Europe and North America, let them welcome them with open arms like they with the Ukrainians.

2 Problems with your post:
1. You have anti-gay sentiment.
2. You are racist.

Mcessen1 , how many Syrian refugees are you sheltering in your home?

the LGBTQI++ organisation is a cult, it shows the dépravation of the western society denying millenniæ of judeo-christian-Islamic heritage. People should not advertise this freely in the streets nor in the media.

If we had sovereign country and real foreign minister we would have rightfully received billions for taking care of Syrian refugees and teaching them democracy and civility so they can make a positive change once back in Syria. Turkey got billions from Europe as refugees would have cost significantly more to Europeans if they reached their shores. Lebanon rightly deserves at least $25 per day for every Syrian temporary refugee in Lebanon. This is over $10 billion per year. FPM has instead used refugees as a cash cow to divert millions to its cronies, instead of FPM foreign minister requesting a UN resolution for these funds to be earmarked in any Syrian donor conference. This will insure Assad would want them back ASAP. In addition, why not learn from US and UAE and offer citizenship to 1,000 students with highest academic score whether Syrian, Palestinian, Asian or African. This give them hope while benefiting Lebanon.