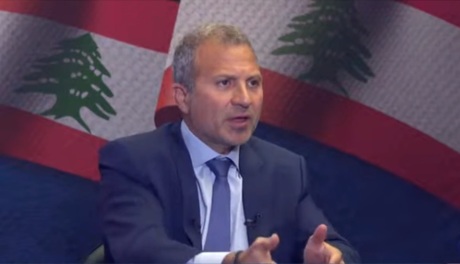 Free Patriotic Movement chief Jebran Bassil on Wednesday said he is against amending the constitution in order elect Army chief Joseph Aoun as president, as he warned that there will be “more than social and constitutional chaos if a new government is not formed” before the end of President Michel Aoun’s term.

“We will take part in tomorrow’s presidential election session in parliament and we will cast blank votes,” Bassil said in an interview with Al-Jazeera TV.

Responding to a question, Bassil said the FPM cannot endorse the presidential nomination of Marada Movement chief Suleiman Franjieh because “there are differences over the reformist ideas, the building of the state and the essential political thought.”

“This issue does not concern me in person, but rather concerns the people who granted me their confidence,” Bassil added.

“We have not limited nomination to those who have popular representation and therefore the choices have become wider, but not by much, and our strategy is to avoid vacuum,” the FPM chief said.

“We are flexible about the possibility of agreeing on a president and we have specified the main points through our (presidential priorities) paper,” he added.

“The idea that the constitution can be amended every time is something that we don’t prefer, seeing as Lebanon must become accustomed to regularity and the key Maronite posts in the state, such as the army command, the central bank’s governorship and the presidency of the Higher Judicial Council should not be a launchpad for reaching the presidency,” Bassil went on to say.

The only path to regularity as a regularity is to have the president directly elected by a popular vote of the people to be governed, without consultations and independent of the courts or the legislature. If anyone isn't Lebanese, or refuses to be governed, or votes anywhere else, they ought not count.

Isn't it enough that Lebanon does not have an operating government, it seems that there are plenty that don't want the country to have a president either.
It's time that votes in parliament are by a simple majority of just those MP's who are present. This might actually bring more MP's to attend the sessions.

This thug would only vote for his sad self.