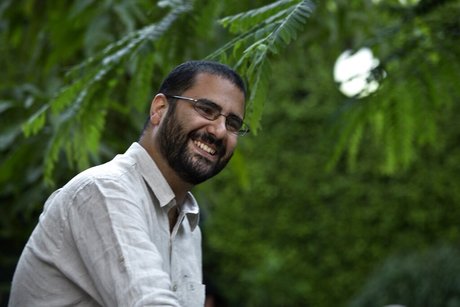 The family of imprisoned Egyptian activist Alaa Abdel-Fattah said Tuesday they received a letter from him saying he has ended his hunger strike.

In a statement, the family said that Abdel-Fattah's mother, Laila Soueif, received a short note in her son's handwriting via prison authorities. The letter is dated Monday. In it, he asks her to come for her monthly visit to him in prison on Thursday.

''I've broken my strike. I'll explain everything on Thursday,'' the letter read.

The family has not seen Abdel-Fattah since the last pre-allotted visit a month ago and has not been given information on his condition. In the note, Abdel-Fattah asks his mother to bring a cake to celebrate his 41st birthday, which is on Friday. The meetings, conducted behind a glass barrier, usually last for around 20 minutes.

"From the letter, it is clear that his psychological state "is good," Soueif told The Associated Press, referring to her son's reference to his birthday. "But I won't be reassured until I see him."

Fears had been mounting over Abdel-Fattah's life since he stopped intake of all food, then stopped drinking water on Nov. 6, escalating a months-long partial hunger strike to pressure for his release. His strike was timed to coincide Egypt's hosting of the international climate summit to draw attention to his case and those of other political prisoners. His partial hunger strike began on April 2, after which he was consuming only 100 calories a day

The news comes a day after the renowned dissident announced the end of his water strike on Monday via a similar handwritten letter delivered to the family.

"I feel cautiously relieved now knowing that at least he's not on hunger strike but my heart won't really be settled until Thursday,'' his sister Mona Seif said in the family's statement.

Abdel-Fattah's hunger strike has drawn attention to Egypt's heavy suppression of speech and political activity. Since 2013, Egyptian President Abdel-Fattah el-Sissi's government has cracked down hard on dissidents and critics, jailing thousand and virtually banning all protests.

Abdel-Fattah is one of Egypt's most prominent pro-democracy activists and has spent most of the last decade in prison. He is currently serving a five-year sentence on charges related to sharing a Facebook post. He rose to prominence during the 2011 pro-democracy uprisings — known as the Arab Spring — that swept through the Middle East. In Egypt, the uprising toppled the country's long-time autocratic President Hosni Mubarak.