Israel and Jordan agree to team up to save Jordan River 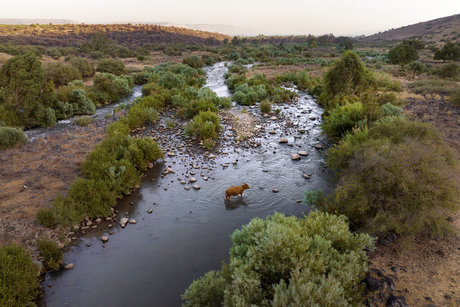 Israel and Jordan signed a declaration of intent on Thursday at the U.N. climate conference to conserve and protect their shared Jordan River — a sacred waterway nearly running dry because of climate change, pollution and other threats.

The agreement, struck at COP27 in Sharm el-Sheikh, Egypt, where world leaders are discussing how to mitigate the escalating impact from a changing climate, marks an important, albeit initial, step in cooperation.

Water cooperation was a key element of the 1994 peace treaty between the two countries but chilly relations over the past decades have complicated efforts to increase water supply to the Jordan River.

The plan announced Thursday is short on specifics. It says Israel and Jordan have promised to try to reduce river pollution by building up wastewater treatment facilities and upgrading sewer systems to prevent riverside cities from dumping raw sewage into the waters, according to a statement from the Israeli government.

The two countries also aim to promote sustainable agriculture, controlling runoff from farm fields and reducing the use of pesticides, it added, without elaborating on how.

"Cleaning up the pollutants and hazards, restoring water flow and strengthening the natural ecosystems will help us prepare and adapt to the climate crisis," said Minister of Environmental Protection Tamar Zandberg.

Jordan's state-run Petra news agency said the plan will hopefully increase water supplies and create job opportunities "for those living on both sides of the Jordan River, including Palestinians."

The waterway separates Jordan to the east from the Israeli-occupied West Bank, seized by Israel in the 1967 Mideast war and sought by the Palestinians for their future independent state. The water basin is billed as the site where Jesus was baptized, drawing tourist revenue for both countries.

In recent years the once-rushing waters of the Jordan River have been reduced to a trickle as population growth and climate change take their toll.

Jordan reported on Thursday that the river's runoff has plummeted to a mere 7% of what it once was. Because its waters feed into the Dead Sea, the saltwater lake is now disappearing — its levels dropping by three feet per year.

Just shows what can be done when two neighbouring countries agree on things.