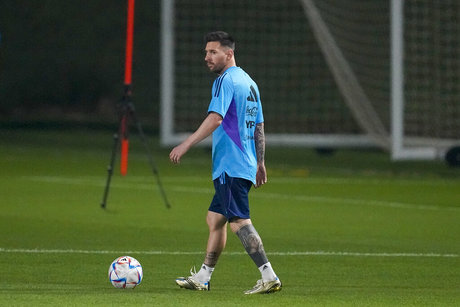 Lionel Messi begins his legacy-defining World Cup with a game against likely the weakest opponent the Argentina star will face in Qatar.

On a 36-match unbeaten run, Argentina opens the group stage Tuesday against Saudi Arabia — the second lowest-ranked team at the tournament.

It seems like an ideal chance for Messi to push his international goals tally toward a century — he currently has 91 — in what's surely a forlorn attempt to catch the leading men's mark of 117, owned by great rival Cristiano Ronaldo.

How Argentina coach Lionel Scaloni treats Messi for this game in particular, being staged in the 80,000-seat Lusail Iconic Stadium, might be instructive given the captain's fitness has been managed heading into the World Cup.

Messi trained individually on Friday and Saturday because of what the Argentina soccer federation described as "muscle overload." That raises doubts over whether Messi will play the full 90 minutes against Saudi Arabia.

Not that he should be needed that long.

The Saudis might have come through Asian qualifying relatively comfortably, but they tend to struggle on soccer's highest stage, reaching the last 16 only once in their five appearances at the World Cup.

They started the 2018 tournament with a 5-0 loss to Russia, the host nation.

Then again, Argentina opened that World Cup with a disappointing 1-1 draw with tiny Iceland — in a match which saw Messi have a penalty saved — that immediately put pressure on the Albiceleste.

That's something the team is eager to avoid again.

"I missed, we drew and then the mess came," Messi recalled in a recent interview. "The first game is key because if you're going to play Mexico with the three points from the Saudi Arabia game, it's something else."

It's unlikely the Argentines will trip up this time. Copa America champions in 2021 for their first major title in 28 years, a national-record unbeaten run — one short of tying the world record set by Italy from 2018-21.

Scaloni, Argentina's somewhat accidental coach, has turned his team into an extremely well-balanced unit and back to being a major force in world soccer. Where, many believe, it belongs.

Messi is obviously the star at the center of everything and is looking to finally win the World Cup to boost his standing as arguably soccer's greatest ever player.

By playing against Saudi Arabia, Messi will become the first Argentine player to play in five World Cups — one more than Diego Maradona and Javier Mascherano.

Scaloni has had to contend with injuries to midfielder Giovani Lo Celso and forwards Nicolas Gonzalez and Joaquin Correa in the lead-up to the World Cup.

Saudi Arabia is set to be well-backed at the World Cup because it shares Qatar's only land border to the outside world, and fans will drive across in their droves to attend the match taking place at the tournament's biggest venue.

Under French coach Hervé Renard, the Saudis have been in preparation for several weeks after domestic competitions were paused so players could focus on the World Cup.

"We are ready for this fabulous tournament," Renard said.