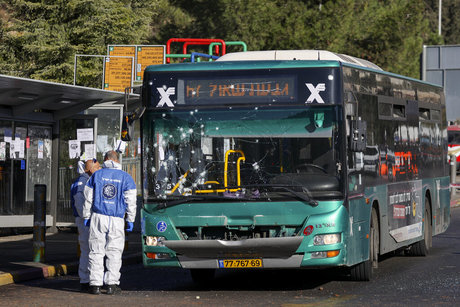 An explosion at a bus stop at the western exit from Jerusalem killed a man and wounded 11. A separate blast at another stop a short distance away damaged a bus and wounded three people, the hospitals treating the casualties said.

The twin blasts struck half an hour apart, police said, noting that explosives experts were at the scene with police and forensic scientists "collecting evidence and scanning the area for suspects."

An AFP photographer at the scene said the blast had ripped a hole through a metal fence behind the bus stop, with an electric scooter and a hat lying on the ground.

The photographer said the second blast had torn through the side of a bus.

Jerusalem's Shaare Zedek hospital said a man had died of his wounds from the first explosion. Doctors were treating another person in critical condition, two seriously wounded and two lightly wounded.

Hadassah medical center said it was treating six people injured in the first blast and another three people lightly wounded in the second.

Public Security Minister Omer Bar-Lev said he spoke with the police chief and was "briefed on the two attacks in Jerusalem."

"We congratulate our Palestinian people and our people in the occupied city of Jerusalem on the heroic special operation at the bus stop," Hamas spokesman Abd al-Latif al-Qanua said.

The European Union's ambassador to Israel said he was "horrified by the terror attacks."

"I express my deepest condolences to the family of the victims and wish a speedy recovery to all injured. Terror is never justified," Dimiter Tzantchev wrote on Twitter.

Violence has flared this year, particularly in the occupied West Bank, where the Israeli army has launched near-daily raids since a series of deadly attacks on Israeli targets earlier this year.

During the second intifada, or uprising, in the early 2000s, Palestinian militants repeatedly planted bombs at urban bus stops, including in Jerusalem.

#FreePalestine, one Zionist at a time. YHWH is waiting! :D

I am not even going to lower myself to your disgusting level by answered the lies you write in your message.