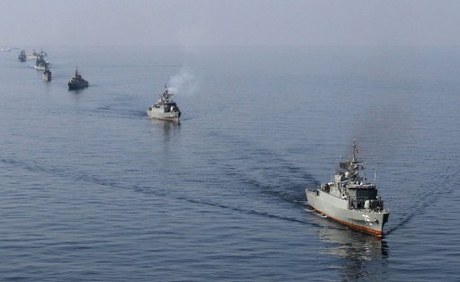 Two Iranian warships sent by Tehran to the Mediterranean last week to help "train the Syrian navy" entered the Suez canal early on Tuesday on their way back to Iran, a canal authorities source told Agence France Presse.

The ships, a destroyer and supply vessel, came from the Syrian port of Tartus and were heading south towards the Red Sea, the source said, adding that they were due to complete their transit of the canal by Tuesday afternoon.

Their arrival in Tartus, announced by Iranian state media on Monday, came amid heightened tensions between Iran and Israel, fuelled by a longstanding row over Tehran's nuclear program, and as unrest continues to rock Syria.

Speculation has been rising that Israel might launch air strikes against Iranian atomic facilities.

Iran is a key ally of President Bashar Assad, and accuses Israel and the West of seeking to destabilize Syria, where activists say the regime's 11-month crackdown on pro-democracy activists has left more than 6,000 people dead.

did no one think that these warships that came to "train" Syrian Navy were perhaps here to supply the army with some more ammo and weapons? I mean Im sure a naval training would more time than just 1 day.

long way to go for a couple of boxes of baraze2, but someone at naharnet should have flipped the picture to show the ships going back that would have been real cool.

The Syrian army doesn't need more weapons and ammo. What they've confiscated from the freedom terrorists is enough to last them a decade.

The water was cold. Plus they didn't have much ammo to spare for exercises. Also they thought, time was inappropriate for it, since the navy might defect.

Syria needed more bullets and tank shells. That is why the supply ship came. Iran is facilitating more death in Syria.