Syria Bombs Bridge to Prevent Refugees from Fleeing to Lebanon 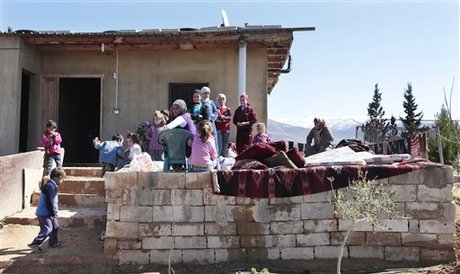 Syrian regime forces bombed on Tuesday a bridge used by refugees fleeing to Lebanon from the central province of Homs, cutting off a key escape route to evacuate the wounded, a monitoring group said.

"Regime forces on Tuesday bombarded a bridge near Qusayr, in Homs province, which is used by refugees and the wounded fleeing to Lebanon," Rami Abdel Rahman, of the Britain-based Syrian Observatory for Human Rights told Agence France Presse.

Hadi Abdallah, a Syrian activist in Homs, said the bridge was the main route used to evacuate the wounded from the battered city, which has suffered a relentless onslaught by regime forces.

"The bridge was hit by artillery shells," said Abdallah, reached by telephone from Beirut. "It can no longer be used.

"It was the main route used to transport the wounded," he added.

Around 2,000 Syrians, mainly women and children, have crossed into Lebanon in recent days, fleeing the violence in Homs, U.N. and local officials said.

Dana Suleiman, of the United Nations refugee agency, told AFP that 170 families had sought refuge in the border Lebanese village of el-Fakha, located in the eastern Bekaa valley, and 50 others were in the nearby town of Arsal.

"We are trying to verify whether there are additional people in other areas and how many have returned to Syria," Suleiman said.

She said the UNHCR, in cooperation with local non-governmental organizations, was sending food, blankets and other aid to the refugees.

Ahmed Moussa, a spokesman for the Committee of Syrian Refugees in Lebanon, said some 65 families had arrived in northern Lebanon on Monday, some of them having moved on from the Bekaa.

He said the majority were from Homs and Qusayr.

great news maybe that will stop the grubs crossing over into Lebanon.Now they can stay where they belong.

Shame on you! I do hope whenever a drama occurs, nobody will help you or your family. Ya 3ayb el shoom 3aleik.

Yesterday armed thugs used this same bridge to attack the Lebanese army, so for Lebanon this is good news, sorry for the wounded but ...

bel ro7 bel dam yafdouk ya sheikh sa3d. And cheikh Saad is busy skiing on the alps or traveling is his private jet or busy playing mortal combat video game and decimating his enemies while someone is massaging his shoulders.

If Saad dares to step a foot in Lebanon HA already has his grave waiting for him so leave him out of the picture. And Mansour...how can you call your fellow brothers 'grubs' who are seeking the same freedom that us Lebanese are fighting these scums aka HA. Both the Lebanese and Syrian people are fighting the same enemy - HA & the Syrian regime! If we get rid of Assad and his organization, HA will crumble and inshallah we all will live in peace & harmony between two of the most beautiful & resourceful countries on this planet!

Assad regime and his minions (most of them M14 now) throwed me in military jail for 13 days back in 2003 so I will probably be the happiest person on this forum if they fall. But to be replaced by Salafis just like it happened in Egypt, Tunisia and Lybia: no thanks. Having Israel on our border is bad enough but having the political arm of Al kaeda on the other border this will mean certain death to the country!! So sadly I second the churches (catholic and orthodox alike for once) choice

On this one, I must admit I'm disappointed by Hariri Junior. He's exactly doing like the terrorist leader Nasrallah, which is hiding.... Sheikh Saad, your country and, more importantly, your people need you!

and nasralah is bussy chasing mice in the slums of da7iye and being vitamin D defficient lol. I think saad has it better.

They learned that from the Israelis.

As if Tripoli and Akkar do not have their own share of local filthy Sunni crazies.

i learn more and more everyday how the lebanese are just as racist as the israelis. People like you enlighten me with their glow. How about them filthy she3a crazies in the da7iye? why are these ones 7alal and the others 7aram, they both should be banned and disarmed. It is people like you who are breeding salafism in lebanon btw.

Unfortunately, Lebanon has become the rubbish bin and theater of muscle stretching of the Middle East.
What next?

Air Strikes now by Nato Un whatever but just do it!!!!

How many kids do they have ?

Unfortunately, the Lebanese have a very short memory. They forget they were in the same situation in the seventies and eighties fleeing the same army which seems so efficient in killing civilian.

Lol, so the bridge is not used for smuggling of arms and terrorists? The media today has become a real farce.

God save the innocent in Syria from this ruthless dictator Bashar al Assad.

the article says refugees not armed thugs, if you disagree with this site and ts journalists then why bother reading it and posting stuff that wasn't even mentioned ( irrelevant in this context ) you just ignorant!

The ones that doesn't grant mercy should not expect it in return when the time comes. Assad will fall and his begging for mercy will not help.

@Kesrweneh: Hope you're not a Aoun supporter then because he completely forgot about Lebanese prisoners in Lebanon after they gave him power...

I guess the families escaping are also terrorists that's why the Syrian military destroys the bridge? Defenders of the Syrian people indeed.

unfortunately there is no lebanon and never wasone...