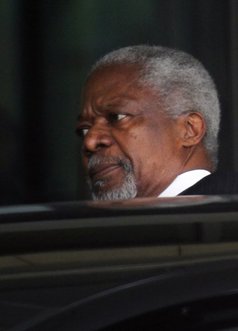 Russia on Saturday said Syrian peace envoy Kofi Annan was not seeking President Bashar Assad's ouster but a solution to the year-long conflict that suited both the opposition and the regime.

Foreign Minister Sergei Lavrov said he spoke to Annan shortly after his talks with Assad earlier this month and was informed that the strongman president's resignation was not under discussion.

"I can assure you that there was no talk about Assad's departure," Lavrov said in comments posted on the foreign ministry's website from an interview with a state television channel to be aired Saturday evening.

"I believe that the issue of Syria's future should be decided by the Syrians themselves," he said.

Russia has been under mounting pressure to use its Soviet-era links to the Syria government to put extra diplomatic pressure on Assad and some Western diplomats have recently said they detected a change in Moscow's tone.

The United States said on Wednesday that it had narrowed its differences with both Russia and China -- two U.N. Security Council powers that blocked past efforts to condemn Assad -- amid recent criticism of the Syrian leader by Lavrov.

The Russian foreign minister this month expressed disappointment with Assad's "big delay" in implementing reforms and admitted that his government was not always taking Moscow's advice.

Lavrov said on Saturday that Russia was willing to support any solution to the crisis agreed by the Syrians themselves.

"Russia will back any agreement that emerges from a broad political dialogue between the government and all opposition groups," Lavrov said.