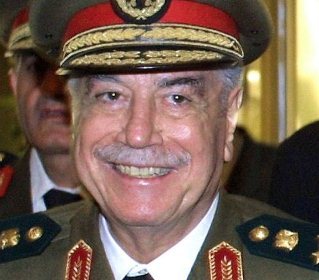 A Syrian rights group said on Sunday it had filed a war crimes complaint with French authorities against former Syrian Defense Minister Mustafa Tlass who was reported this week to be in Paris.

The Syrian Association for Freedom provided AFP with a copy of the complaint it had filed with Paris prosecutors on Friday accusing Tlass of responsibility in "several war crimes including the massacre in the city of Hama in 1982."

That year forces loyal to the regime of President Hafez Assad, the father of current president Bashar Assad, bombarded Hama over four weeks to put down an uprising. Between 10,000 and 40,000 people were killed, according to various estimates.

The group's head, Abdelhnasser al-Hanidi, said it had 300 witnesses ready to testify in the case.

Syrian opposition representatives told AFP this week that Tlass, Syrian defense minister from 1972 to 2004, had arrived in Paris with one his sons, but that they were not defecting.

The French Foreign Ministry could not confirm his presence.

May the Syrian opposition also in there charge sheet include some of the crimes this criminal (Tlass) and his brothers in crime committed in Lebanon.And while the opposition are at it could they seek compensation on my behalf.

Flamethrower you defend people that have the blood of thousands of Lebanese on their hands, especially Christian ones.

What's pathetic is that the great Assad army can't crush a revolt even after a year despite having total military superiority and thousands of tanks and artillery. Now they beg for money from Iran to survive while Bashar's wife buys fancy furniture online.

Uhhh, Rifaat al-Asad has been living in Paris and London since the 80's. He led the Hama operations againt the ikhwan terrorists. Why are there no complaints against him? Just because he's anti-government?

Flame,
Your ability to "predict" events after the fact is only matched by the predictability and inanity of your own posts.

mfawaz: I have quite a few of YOUR "diatribes" on this forum, and if I were you, might not want to criticize others, as your's absolutely and positively make NO sense whatsoever. Go sit in the corner and keep your mouth shut. If your lucky, you might learn something...

Where is Khadam by the way?

@Flame bonehead, Try Googling Ghazi Kan3an and his brother Ali death, this will tell you again the truth behind following or defecting from the current terrorist regime. Keep defending a bloody regime with your blind eyes and mind maybe one day the Sun rises from the west.