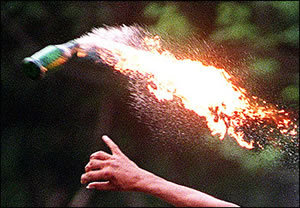 A Molotov cocktail exploded on Friday in the parking lot of ABC mall in Dbayeh, north of Beirut, creating a small crater but causing no major damage, the National News Agency reported.

NNA said the petrol bomb exploded at 9:45 am.

A military expert, who inspected the scene, said the bomb caused a 10-centimeter-deep and a five-centimeter-wide crater, the agency added.

Security forces inspected security cameras installed in the area to identify the assailants.

But ABC’s management announced in a press release that “there has been no explosion in the parking lot of Dbayeh mall as stated this morning in the press.”

“The explosion happened in the morning hours on a side road away from the mall that was not affected,” it said.

“ABC Dbayeh mall opened at 10:00 am and is currently resuming normal activity,” the statement added.

Some one is training.

Nothing to worry about people, it was either a personal dispute between two friends or it was someone getting rid of expired molotov cocktails

Bahraini oppressed activists and freedom fighters objecting coz their favorite Chanel perfume is out of stock.....

Was is a molotov? People in Dbayeh said they heard an explosion

That was not nice of you FT. You must be M8 or Iranian, better yet syrian.

FT decoded it for you.

Molotovs don't leave 10cm deep crater. The dimensions of the crater, 10cm deep and 5cm wide don't make sense. Even a pipe bomb would have created a wider "crater".

it was m14 zionist traitors. surely benzona and hsi group.
they are guilty for everything bad in this country.

These same brainless 'trolls' have nothing to do than comment on naharnet!
Naharnet please ban these tards: jcamerican jabalamel flamethrower. They all give a new meaning to the word 'IDIOCRACY'.