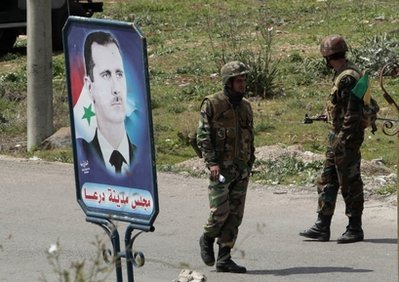 At least eight people were killed in violence in Syria on Sunday, including four soldiers who died in a blast at a military center in the northern province of Aleppo, monitors said.

Two civilians were shot dead by snipers in the district of Juret al-Shayah of the city of Homs, the symbol of revolt in central Syria and where two U.N. observers are permanently based, the Syrian Observatory for Human Rights said.

The Observatory said that government forces killed one civilian and wounded three others in the central province of Hama.

Another civilian was killed by regime forces in the eastern city of Deir Ezzor, where authorities were reportedly conducting raids, the Britain-based Observatory added.

The latest bloodshed comes as Norwegian General Robert Mood arrived in Damascus on Sunday to take charge of the U.N. observer force.

On Saturday, violence across Syria left at least 32 dead, including 22 civilians killed by government forces.

The uprising against Syrian President Bashar al-Assad's regime, which erupted in March last year, has so far left more than 11,100 people killed across the country, mostly civilians, according to the Observatory.