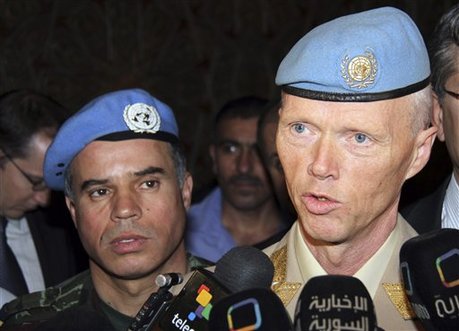 Major General Robert Mood, head of the U.N. observer mission in Syria, called on all sides to "stop the violence" upon his arrival in Damascus on Sunday.

"To achieve the success of the Kofi Annan plan, I call on all sides to stop violence and help us continue the cessation of armed violence," Mood told reporters.

"We will work for the full implementation of the six-point Annan plan which the Syrian government agreed to. To achieve this, we now have 30 monitors on the ground, and in the coming days we will double this figure," he said, adding that the number would "rapidly" increase to 300.

The veteran Norwegian peacekeeper's arrival came as at least eight people were killed in violence across Syria, according to the Syrian Observatory for Human Rights.

A putative truce, which technically came into effect on April 12, has taken a daily battering.

The European Union on Friday expressed extreme concern about the persistent bloodshed in Syria, which has killed more than 9,000 people since March 2011, according to U.N. estimates.

Also on Friday, Amnesty International said it had received the names of 362 people reportedly killed in Syria since the U.N. observers first deployed on April 16 to monitor the peace deal.

Major Mood's statements would have been relevant if he was applying them to Norway.
In Syria the government will say whatever is helpful for it to buy time and will continue to kill, torture and destroy all who oppose it.
A month from now and a few thousand victims later the UN will discover that things did not change a bit. Then what?