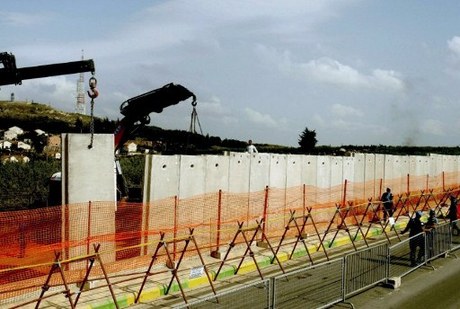 Israeli troops on Thursday crossed the Blue Line while constructing the border wall that they started building on April 30, reported the National News Agency.

It said that the forces crossed 65 centimeters into Lebanese territory near Kfar Kila as they were attempting to expand the border wall beyond the measurements that had been agreed upon.

The Lebanese army noticed the violation and went on alert.

The Commander of the United Nations Interim Force in Lebanon Major General Paolo Serra soon arrived at the scene along with a number of army officers in order to follow up on the development.

Serra soon made the necessary contacts on the Israeli side of the border in order to tackle the situation, which he labeled as a blatant violation.

"This construction, which began on Monday, is being carried out in coordination with UNIFIL and the Lebanese army. The wall is intended to avoid frictions on the border," she said.

i wish you would condemn with the same strenght the violations of lebanese land by the syrians who are taking MORE than 65 cm of our territory...

Moaten: The Syrians ARE a land-stealing colonizing enterprise of the worst kind. The Syrians have ONE dream: to annex Lebanon. Nothing else matters. You say it took decades to get to Israelis out? well it too THREE decades to get the Syrians out and they STILL don't want to leave us alone. Remember that Syrian NEVER recognized lebanon as an independent state worthy of an embassy until very recently and very grudgingly.

That's it and that's that.

Mowaten: yes, they came on invitation. Yes, they saved us (the Christians, specially the Maronites), from jumping into the Mediterranean and heading for the West forever. But fact is, they overstayed their welcome. And, again, they never, ever, accepted our country as a distinct, independent nation. They still don't.

I wrote the Hezbollah and other Lebanese party are the enemy. Do you have any idea how much it hurts to call a fellow Lebanese an enemy? And yet I do it because they are so blindly allied with our country's worst EXISTENTIAL enemy. I don't consider Israel as an existential enemy. They Israelis just want to be left alone. They don't care about our country. They just want to be left alone. Leave them alone.

I guess it is a matter of perceptions. You don't know what the Syrians did to my village and my family. They probably treated your family/village/town a lot better.

65 centimeters? Is this really newsworthy? What the hell is wrong with you people?

Hold on.....why bother the Lebanese Army? Isn't this why we have the resistance? LOL!

The Israelis violate the territory by 65 CENTIMETERS and the ARMY GOES ON ALERT? fine! The Syrians have done several military incursions and KILLED people on LEBANESE TERRITORY and the Lebanese "Government" and the so called "Resistance" do nothing but excuse them. What do you call this behavior? what do you call the people running this country or blackmailing it with weapons pointed at every citizens head?