March 8 Leader to Plumbly: U.N. Should Save Reputation in Arms Ship Case 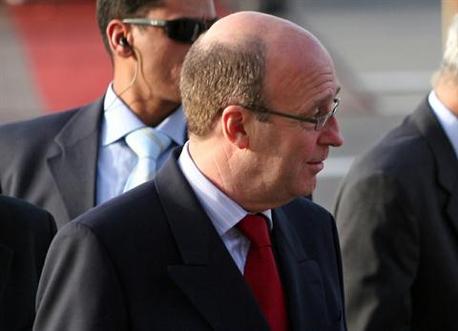 A March 8 coalition leader has recently told U.N. Special Coordinator for Lebanon Derek Plumbly that the world body should help Lebanon in the investigation of an arms ship intercepted by the Lebanese army to save its reputation, As Safir daily reported on Saturday.

The newspaper said the March 8 leader asked Plumbly how the ship was able to enter Lebanon’s territorial waters despite all the measures taken by UNIFIL’s naval unit.

“It is in your interest to help the investigation in unveiling the truth and saving your reputation,” the leader reportedly told the diplomat.

“You have to answer the big question as to how U.N. ships were not able to see the vessel,” he said.

The Lebanese navy intercepted Lutfallah II off the Batroun coast last month and discovered three containers loaded with weapons on board.

The arms were suspected to be heading to Syria to help rebels fighting the regime of President Bashar Assad.

Military Tribunal Judge Saqr Saqr charged 21 individuals in the case. Fourteen of the suspects are in custody, two remain at large, and the rest remain unidentified.

As Safir daily quoted Army chief Gen. Jean Qahwaji as saying that the military is dealing seriously with the issue and it would arrest and refer to the judiciary any person involved in the case.

Qahwaji discussed the issue with Syrian Ambassador Ali Abdul Karim Ali and the secretary-general of the Lebanese-Syrian Higher Council, Nasri Khoury, on Friday.

As Safir said that “Lebanese authorities were informed about Syrian frustration from provocative steps taken by some Lebanese sides against Syria.”

Damascus urged Lebanon to reveal the details of the probe “particularly that it received information about the involvement of foreign sides in the case of the vessel in cooperation with Lebanese sides that have been working for a while to harm ties between Lebanon and Syria,” As Safir said.

you have to ask the question on how did the lebanes army caught this Ship????
How come they Almighty Lebanese army never caught a car loaded with arms?
It is kind of weird this whole ship story.

Forget about it! It's another syrian trap! Syria doesn't know anymore how to harm Lebanon and tries hard to do so.

Syria has always been Lebanon's fierest ennemy! Even fierest than Israel!