March 14: The Uprising of Dignity is Against Oppression and Assassination 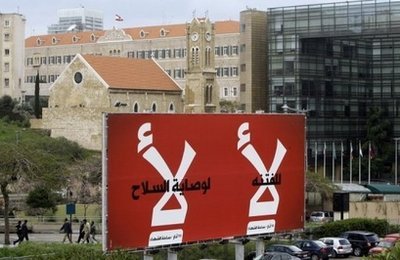 March 14 general-secretariat coordinator Fares Soaid called the rally at the Martyrs Square on Sunday “the Intifada of Dignity,” and vowed to remain united.

“We will call this uprising the Intifada of dignity,” Soaid told the March 14 supporters. “The uprising is against oppression, treachery, assassination and arrogance.”

“We promise you from this square not to back off,” he said.

Democratic Left Movement leader Elias Atallah, who also addressed the rally, said: “We say a thousand no to the arms of militias.”

“We won’t back off from our demands to achieve our objectives,” he told cheering crowds.

Arms outside the control of the state are “weapons of strife,” he said. “The party of the Faqih rule,” won’t succeed, Atallah added.

Henchak MP Sebouh Kalbakian urged Hizbullah to “lower arms turned against Lebanese” but extended his hand to the Hizbullah-led alliance, saying: “Let us build a nation together with the red and white colors (of the Lebanese flag) with the Cedar” in the middle.

Dory Chamoun, head of the National Liberal Party leader, addressing the crowds gathered at the square said: “We say no to arms outside the control of the state.”

“We will confront them with stances,” he added.

MP Ghazi Youssef, who was among those who delivered speeches at the rally, said Hizbullah should turn its arms towards Israel.

“This day is to renew the national pact between all Lebanese from all sects,” he added.

Caretaker Minister Butros Harb told the rally that the March 14 supporters “are gathered here to revive the dream that we launched in 2005.”

“We hold onto our principles,” he said.

Caretaker Minister Michel Pharaon said: “We reject the hegemony of arms. We want a strong and just state that won’t be achieved under the control of weapons.”

“No one will be able to assassinate justice,” he said about Hizbullah’s campaign against the international tribunal.

Deputy Speaker Farid Makari also addressed the crowds. The people reject the resumption of assassinations as a means of repression, he said.

“We will put Lebanon on the right track,” he said.