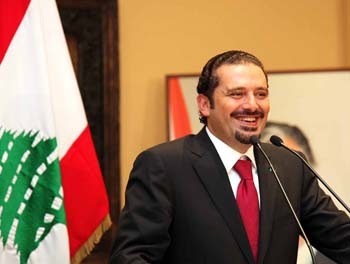 Former prime minister Saad Hariri on Tuesday commended Tripoli residents for their “awareness” that “foiled all attempts to drag the city into a new series of chaos and discord.”

“It also showed the adherence of the people of Tripoli to the project of the state and its institutions by refusing all attempts to lure them against the state, because they believe that such attempts harm the city and the unity of the whole nation,” Hariri said in a statement.

Hariri stressed that “the people of Tripoli have the right to freely express their opinion according to laws, and the state should ensure this right and protect it and provide suitable solutions for the repercussions of the tensions experienced lately by the city.”

He called on all local and political leaderships in Tripoli to “accompany and support the security procedures, to preserve the security and stability of the capital of the North.”

Army troops deployed on Tuesday in sectors of Tripoli affected by clashes, in a bid to calm the northern city after three days of sectarian fighting that killed nine people and wounded dozens.

Troops entered Syria Street, the frontline of fighting between the majority Sunni Muslim district of Bab al-Tabbaneh, and Jabal Mohsen, whose residents are mostly Alawite, at around 6:00 am.

Battles first erupted on Saturday between residents of the rival neighborhoods when General Security agents arrested Shadi al-Mawlawi, a Salafist, on charges of belonging to a terrorist organization. Mawlawi's supporters say he was targeted because of his help for Syrian refugees fleeing to Lebanon.

Earlier on Tuesday, Hariri discussed the developments in Tripoli with President Michel Suleiman.

Hariri tackled “the necessary measures to resolve the explosive situation between Bab al-Tabbaneh and Jabal Mohsen in order to resolve the clashes” in Tripoli, the ex-PM’s press offices said in a statement.

According to An Nahar newspaper published on Tuesday, Hariri demanded Qahwaji to order the army to interfere to end the clashes.

The former PM voiced his support for this step and to lift the political cover off all the armed men.

For God sake please stop el falsafet from your heaven! Come on the ground ya Qaed and then you can speak. Meanwhile focus on skiiing and twittering, it's fun and you have tons of fans :)

Maybe I should ask him what he had for dinner and if he prefers blonds to brunettes? Anyway from insider info I have he cannot make the difference he even bangs married women working around him :) want names?

am so happy noone from M14 dared commenting :) Al soukout 3alamatou el rida!

ya reformist, you open your big mouth and you say nothing but trash...you should start by reforming yourself or go sit on your crazy ahbal general aoun's lap and play with his oranges, maybe he'll promote to a clown helper position...

rudes, I am very chilled dude...why don't relax and go back to sleep...the truth bothers you? doesn't moooooo? :)

Allouchito let me take it all the way with you! When did this leader (leader is a big word he is just the silly son of a martyr...) say anything that makes sense? Except having some fun and sympathy from his twitter followers? Just convince me :)
He talks girls, diet coca cola (he does not mention how much he actually loves alcohol), cars...
Believe me I know what I am talking about I know many people very close to his 'circle' and the stories are scary :)

reformist, I really don't care what any of us or our leaders do in their own personal time...No one is a saint and we surly don't want to be government but any religious order...I will tell you this though, We should all be backing Hariri/Al Mustaqbal as a moderate Sunni leader otherwise someone else will be quickly and savagely waiting to fill the void and the all hell will brake lose and you will be begging for Hariri to come back. Lebanon should be a country of moderates with no room for extremists whomever they are...

are you any better? never talk about girls? don t love cars? at least he is normal...
what a clever comment...