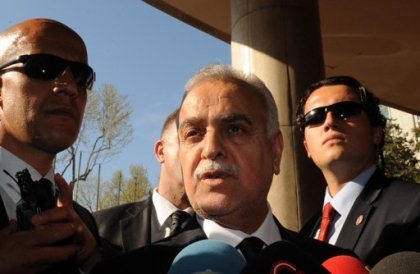 Victims' families and witnesses on Tuesday accused Iraqi Vice President Tareq al-Hashemi of masterminding killings at the opening of his trial in absentia on charges he says are politically-motivated.

Hashemi, one of the country's top Sunni Arab officials, was accused in December of running a death squad and, along with his staff and bodyguards, faces around 150 charges.

The vice president, last known to be in Turkey, is the subject of an Interpol red notice calling for his arrest.

The Central Criminal Court of Iraq opened the case Tuesday morning after a two-week delay over a venue dispute, and heard testimony from families of three victims whose deaths Hashemi is accused of orchestrating, according to an AFP journalist in the courtroom.

Three other witnesses gave testimony, accusing Hashemi of masterminding the assassinations, before reporters were led out of the room. Neither Hashemi nor any of his staff were present in court.

Thursday's hearing was tackling the murders of two security officials and a lawyer.

The charges against Hashemi were first leveled in December after U.S. troops completed their withdrawal, sparking a political crisis that saw the vice president's bloc boycott cabinet and parliament over accusations Shiite Prime Minister Nouri al-Maliki was monopolizing power.

Hashemi and his political allies have slammed the charges as targeting their Sunni Arab-backed Iraqiya bloc, which won the most seats in March 2010 parliamentary elections but was outmaneuvered for the premiership by Maliki's alliance.

After the initial charges were filed, the vice president fled to the autonomous Kurdistan region in northern Iraq, whose authorities declined to hand him over to the central government.

They then allowed him to leave on a tour of the region that has taken him to Qatar, Saudi Arabia, and now Turkey. Ankara has said it will not extradite him to Iraq.