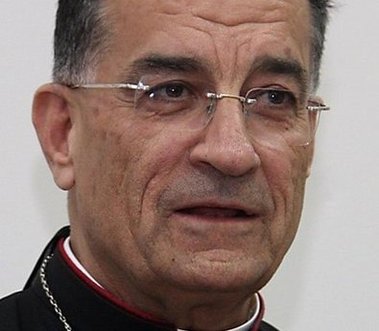 Maronite Patriarch Beshara al-Rahi has expressed confidence that Syria’s Christians would not be affected if the regime of President Bashar Assad collapses in the ongoing turmoil in the country.

“The Syrian regime is dictatorial and the Lebanese have suffered from it,” al-Rahi told the Kuwaiti al-Seyassah newspaper published on Wednesday.

“Assad’s collapse does not affect at all the presence of Christians in Syria because they support the authorities no matter what they are and are not loyal to political systems,” he said in the interview carried out over the weekend during his visit to the U.S. city of St. Louis.

“As long as they are not involved in politics in Arab countries with one-party systems, a single religion and a single opinion, then we don’t have fear on them,” al-Rahi stressed.

The patriarch said he was not worried over the collapse of the Syrian regime but expressed fears of a civil war in the neighboring country, the division of the state and the advance of extremists to power.

“All Muslim sects are moderates but extremists are unfortunately coming to power with the support of some countries to create instability,” he told his interviewer.

The head of the Maronite church reiterated that the Lebanese should unite under the ceiling of the nation and not their sects.

“There are contradictory regional and international interests, and money and promises are pouring … to create strife,” he warned.

“The problem lies in the lack of loyalty of Lebanese to their state,” al-Rahi said. “Instead they are either loyal to their sects or to a party.”

This is to satisfy the Israeli lobby in America so they will not smear him.

The Maronite Patriarch wants to satisfy the Israeli lobby, wow my Qawmi friend you have outdone yourself.

as advised previously: Rahi got a big slap on the hand and is correcting his comments finally. Rome's instructions are clear and should he go back to his previous refrain, expect his resignation soon.
christianity has never been about supporting the oppressors and the murderors.

I dont understand, wasnt he saying that assad was keeping the christians in peace in Syria before?

Late as though this might have been, Al Rai has finally adhered to the voice of reason and justice. It's unfair to see more than 20 million Syrian nationals brutally macsacered by a regime which is made of a handful family members. These kinds of regimes are extinct in today's society. We need to be on the side of justice and fairness no matter what this might have been. I am a Christian but most of my friends are Muslims. I value people based on their quality not religion because this is how life works. We in the ME have swayed from what's right and what religion is. We could have been a beacon of equality rather than a hub for illusionists fundamentalists who mainly use religion to thrive with their wayward ideas. The assad regime will go, if not now certainly later. Justice will prevail.

some people have really a habit of twisting reality!
didn't rahi previously say the syrian regime is the closest to democracy?
how is it in line with what he is saying today? he is a worse flip/flopper than jumblat!

Al Rahi always said that extremist should not rule, he doesn't mind the regime to change especialy being our neighbour...because you can say if they reached to power as in Egypt n other places goodbye to democracy n freedom of thought !!!!!

His comment is totally ungrounded taking in consideration that christians have been here for a loooong time and even under strict muslim rulings.

This isnt a healthy situation....

Iran only two months ago excuted by hanging a convert to Christianity, so much for tolerence.

"we said syria is the closest thing to democracy " did FPM said that to the mothers of the lebanese kidnapped in syria because their only fault was to criticize the regime?
how can a terrorist regime become the closest thing to democracy in 7 years?
by defending the syrian regime you are just killing another time the FPMers murdered in the syrian jails defending aouns ideas before he prostituted himself to hezb and syria....no dignity whatsoever!
FPM are just insulting the intelligence of lebanese people and don t know how to justify their allegiance to their new master...

He is as steady as the wind in his stances ..... almost outdoing Jumlat.

ya Patriarch don't confuse us xD

Nice avatar Tayyar now do you have a picture of GMA from the back as he's running away.

in other word Oops!!!

Rahi has realized that there is no life for the syrian regime in the long run, taking sides with a butcher is extremely dangerous for christians, the revenges in syria will linger for several years to come and things will not end simply by the regime's demise. The Syrians will need a treaty of their own to live together again. Rahi did the right thing for the chrisitans with this smart position. Everyone on here needs to remember that in the 50's Syria had a chrisitian prime minister with muslim consent.