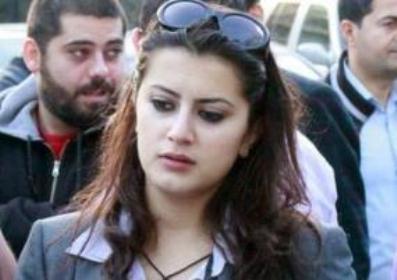 Francis was in Dhour el-Shweir area to cover the electoral process held by the Syrian Social Nationalist Party.

She told the National News Agency that SSNP leader MP Asaad Hardan’s bodyguard, Hussein Hashem asked her to leave, and assaulted her when she refused.

The party apologized from the TV station, denying that the MP’s bodyguard beat up Al-Jadeed correspondent, condemning the incident.

Francis told NNA that she was on the street, right in front of the hotel where the elections were held, and the bodyguard came out asking her to leave.

The reporter insisted she was on a public street, not inside the hotel, which prompted a violent response from the SSNP member.

“The bodyguard beat up Ghadi, punching her in the face and kicking her multiple times,” NNA reported.

Francis said that several people tried to intervene, “including Firas Shoufi, my colleague in al-Akhbar daily, but the bodyguard also hit him in the face.”

Media Against Violence condemned the attack against Francis, calling for legal measures to be brought against the assailant.

“Targeting journalists is a result of the friendly environment which Hizbullah’s cabinet provides by attempting to silence free voices and distort facts,” the group said in a statement.

“We call on the authorities concerned to take the appropriate measures to track the perpetrator and take legal measures against him,” the statement added.

The SSNP issued a statement apologizing from al-Jadeed, and denying that that the SSNP member who beat Francis is Hardan’s bodyguard.

“We apologize from al-JAdeed, and the head of the station’s Board of Directors Mr. Tahsin Khayyat, as well as all the staff,” the party said.

SSNP added that “the man whose name was mentioned as the correspondent’s assailant is not Hardan’s bodyguard. He is a journalist who works for (the party’s mouthpiece) al-Binaa newspaper.”

The party said it will follow up on the issue with the relevant authorities, condemning that attack that “contradicts with the ethics and culture of the party”.

Not surprised at all...

Now all the media reporters should start a "media resistance" and carry arms with them all the time.

Next time one of the polticians bodyguards punches a woman in the face, it will rain bullets on his own.

since yesterday, I have been astonished at this news!
are we in lebanon? is this happening here?
things happening here these days represent us lebanese? since when a woman is punched in the face and kicked several times? (and in public)
are the thugs driving our life?
with this government all the thugs are loose to do whatever they want unpunished!
definately we need to be constantly armed to face this law of the jungle era.
good job m8....

Geha lil2assaf...Lebanon is going down the drain in all aspects of life

All we Lebanese are good at doing is claiming that we are always right and who ever disagrees with us should be shot dead on the spot! A bit of humility and modesty would far for us Lebanese!

Maybe this is his way of foreplay.

Your fellow citizen is the azaar. Shame on both of you. I guess most of you don't know what is sarcasm.

you can't joke about such things.

This is the result of not having a government...

What a shoking sexist and chauvinistic statement! Then again maybe not so stoking considering the source is M8. Their actions and speech betray their true neanderthal philosophy and state of mind.

The SSNP should be placed in the bin of Lebanons History, a party of such idoelogy would not be permitted to operate in a normal civil country.

As bad as this incident is, and the perpetrator deserves to be beaten to death, Hariri Mafia killed two supporters of Shaker Berjawi not long ago in Beirut and destroyed scores of cars and private and public property and not one word about the incident was written here. Democracy, freedom and sovereignty alright, as well as the love of life and the institutions. ya 3ein

so, somehow this is still justified in your eyes.

I feel sorry for you and the people that chose to be your friends. In no civilized country should this be allowed. Of course, these are syrian supporters, so it's probably business as usual in their eyes.

We never said we support this samiam! We said all such acts should be published not only the ones that are of interest to M14. Nothing else. Read before you comment you will look smarter :)

I thought this party only existed in history books......

Physical violence is the practice of those who lack the intelligence to talk. And to hit a woman is plain retardation.

On another note, shouldn't the article say SSNP "apologized to al Jadeed" rather than apologized from al Jadeed", it sounds like a translation from Arabic... With all due respect to the Naharnet staff who do a great job in my opinion.

how can you apologize and deny it at the same time?

The people accusing the person of probably "being part of M14" are stupid, we all know that, but then the people from M14 come here and say that this bodyguard represents all of M8. Ahhhh, Lebanon. No thinking, just shouting.

How else kan SSNP and ther likes prove they are "real" men? Another alternative is to hide in a hole.

i d like to ask FPMers how they feel to be allied to a party that wants lebanon and syria to be one... who denies the existence of lebanon and dream of a greater syria! isn t that contradictory to what they pretend to want? a sovereign and independent lebanon?

please give me a clear reference or statement from M8 supporting your words :)

still no answer to my simple question? doesn t surprise me from M8 sheep...

Some Sunni Islamists M14 supporters believe in a world Sunni Islamic state. The SSNP want Syria and Lebanon to unite, but not under Hariri!! It is an ideology you fool just like the Phalange still talks about a "Christian" state in Lebanon.

Ghadi Francis is part of the SSNP, by the way. Just pointing this out so people know that the reason he beat her is probably not political.