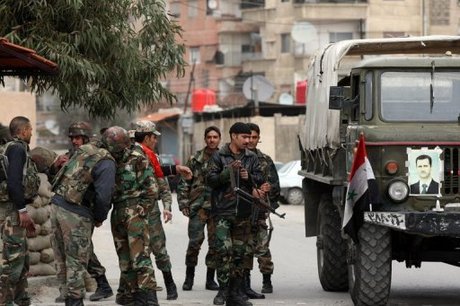 Another general and some 30 soldiers have fled to Turkey from neighboring Syria and joined the swelling ranks of rebel soldiers based close to the border, the Anatolia news agency reported on Monday.

The defection brought to 13 the number of generals seeking refuge in Turkey since the revolt against Syrian President Bashar Assad's regime erupted 16 months ago.

In addition to the general, two colonels and some 30 soldiers flanked by their families crossed into Turkey late on Sunday, said Anatolia.

The defectors were taken to Apaydin camp in Hatay province, some four kilometers from the border with Syria.

The refugee camps in the southeastern provinces of Hatay, Gaziantep, Sanliurfa and Kilis shelter more than 33,000 Syrians, a number that surged after a recent escalation of violence in Syria, particularly in northwestern towns near the Turkish border.

Turkey, once a close ally of Syria, summoned an emergency NATO meeting for Tuesday after accusing Damascus of shooting down one of its military planes in international airspace.

"Turkey, once a close ally of Syria, summoned an emergency NATO meeting for Tuesday after accusing Damascus of shooting down one of its military planes in international airspace."

The reason for this summoning is the russians downed the turkish jet and not the incompetent Syrian Army!

Wow! Now this is deep!

We are witnessing the crumbling of the butcher Assad regime …I can’t wait till I see him chained and dragged through the streets.

I guess two options ASAD will have:
1- Same as Moammar Geddafi or
2- he will be assasinated

You are either born yesterday or totally stupid brain washed. Tell me which warlord in Lebanon did not kill or order his militia to kill other factions in Lebanon. Berri! Nasrallah!! Franjeii!! or the Crazy Aooooun, Oh! Jumblatt, who else, Syrian socialist party and Communist party and many smaller ones! Go educate yourself little bit more about Lebanon recent history and comeback and write something that worth reading.

No one is going to forgive Assad! He can run out to Russia but that is it. He can go nowhere else.